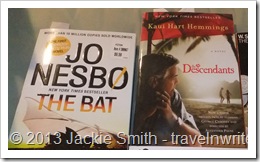 This mode of travel has taken us to far-away places and provided some novel (pun, intended) research for our upcoming fall trip which will take us to a part of the world we’ve never been before.

Regulars here know that our travel compass had to fight the strong magnetic pull of Europe in order to get us headed off to Oceania, or, as it is also known, the South Pacific.

We’ll be aboard the Celebrity Solstice for 19 nights as we travel from Honolulu, Hawaii to Sydney, Australia. It will be our second voyage on this Solstice-class ship that carries some 2,850 passengers and 1,253 crew members.

Our first took us across the Atlantic Ocean so it is only fitting that the Solstice introduce us to the Pacific as well.

So we’ve been busy researching with some fun ‘reads’ including: 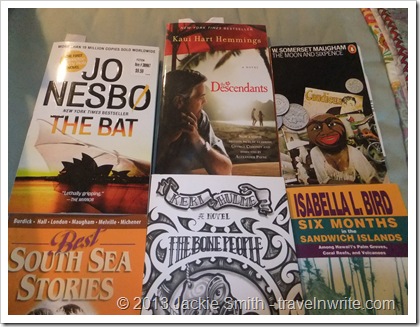 “The Bat” a murder mystery by Oslo-based writer Jo Nesbo, whose character Inspector Harry Hole (no joke) has traveled to Sydney to investigate a murder. This book, purchased from Costco, tipped us off to an area of town – a restaurant, in particular that we want to visit while there.

“The Moon and the Sixpence,” a novel by W. Somerset Maugham, sparked by the life of Paul Gauguin.

“The Descendants” by Kaui Hart Hemmings, set in Hawaii (a movie of the same name based on this book starred George Clooney.) 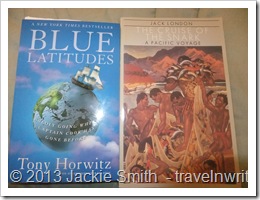 And a few true stories always add to the research:

“Six Months in the Sandwich Islands,” by Isabella L. Bird, written in 1875!

“The Cruise of the Snark,  A Pacific Voyage” by Jack London, about his own journey across the Pacific, first published in 1911.

We can’t get enough ‘novel research’. How about you?  What destinations have novels led you to – or what have novels taught you about destination? What was your favorite armchair trip this summer?

See you back here later this week; we do appreciate the time you spend with TravelnWrite!
Posted by Jackie and Joel Smith at 6:54 PM