That Easter in Greece ~

We may never experience another Easter like the one in Greece. . . 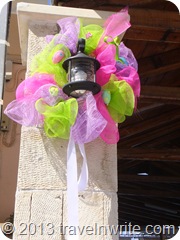 Greek Orthodox Easter is considered more important there than Christmas. We were fortunate this year to be in Crete and experience first-hand Easter Sunday, May 5th.

As with any holiday, decorations and preparations were the prelude to the event. This Easter wreath decorated a restaurant entry in Chora Sfakia, the small harbor town on Crete’s southwestern coast where we spent part of Easter Week. 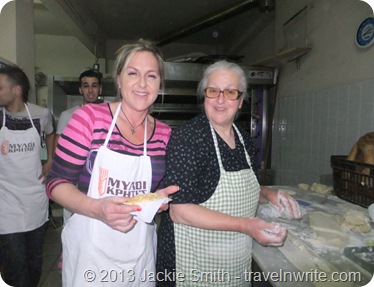 In the early evening, as we walked past our favorite bakery, run by our friend Niki and her husband, in Chora Sfakia, she invited us in to see the production of Kalitsounia, the special cheese pies made for Easter. 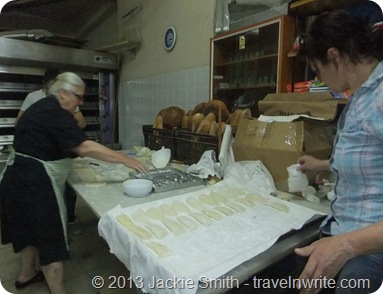 Her mom, pictured with her above, was taking the lead on the baking. Her sister, on the right, was also called into duty. 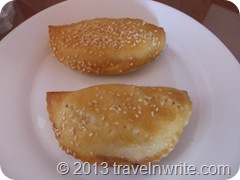 We were honored by getting to sample some from the first batch out of the oven.

(I must tell you – this was one of the highlights of the trip!)

In the early afternoon, not long after we disembarked the ferry that  - in 30 minutes - had taken us further west along the coast to the small village of Loutro ; the place we would celebrate Easter, we couldn't help but notice that ‘Judas’ had been strung up on the beach awaiting his Saturday night fate. 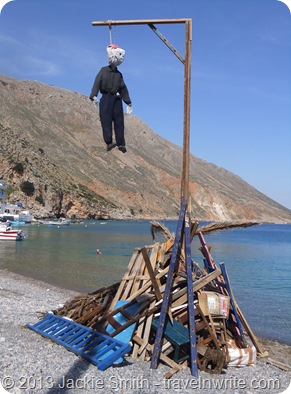 As we sipped a libation late Friday night at one of the waterfront cafes, the sound of chanting alerted us to an approaching  processional. 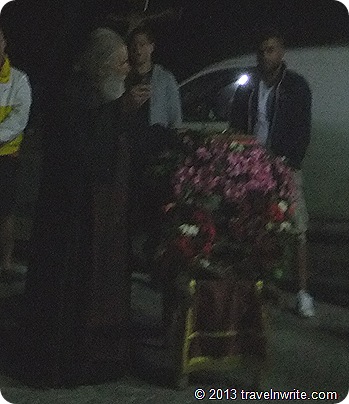 Led by the priest, along Loutro’s ‘main street’, (a sidewalk bisecting  the waterfront businesses and cafes), a flower covered  Kouvouklion, representing Christ’s tomb, was carried to the ferry landing where additional prayers were said before it was carried back to the church.

Among the Easter traditions. . . 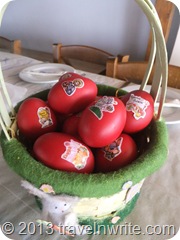 Easter eggs are dyed a deep rich red, signifying the blood of Christ, most are plain but this basket’s eggs had religious images on them).
They weren’t made of chocolate nor were they hidden as part of a children’s game – they were eaten as part of the traditional Easter feasts on Saturday night and Sunday.

The traditional Easter feast features roast lamb. And by late afternoon  Saturday the air was thick throughout the village with the smell of wild thyme and oregano-scented roasting meat being prepared for the late night feasting that would take place at every restaurant. (The front skewer is filled with pork, peppers and onions.) 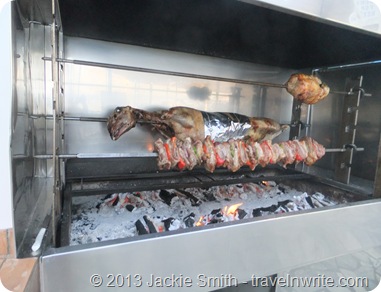 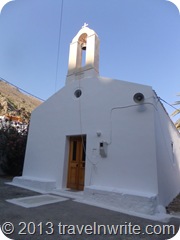 Judas was hanging not far from the church, where the Saturday‘midnight’ (actual time 9:15 p.m.) service was held.

At the conclusion of the service, the bell clanged repeatedly as its rope was pulled, announcing the Priest’s proclamation: “CHRISTOS ANESTI!” (Christ is Risen!).

Then, in a scene much like a New Year’s Eve, the jubilant people filling the church and its courtyard began hugging and kissing, fireworks echoed across the bay, and candles were lit for the processional to the beach.

And then Judas burned. 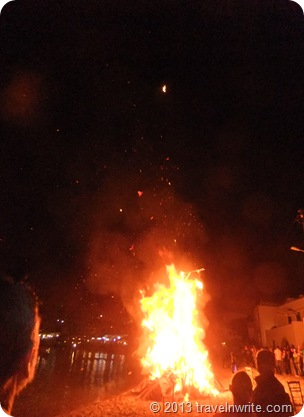 Flames shot high in the sky and the crowd fell back as embers, like fireworks began falling. 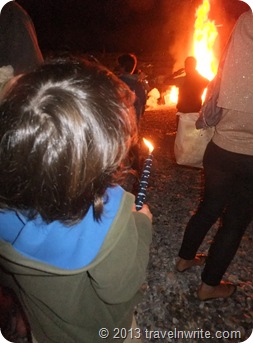 We stood spellbound watching until the flames died and it was time to feast.

You might think this Easter story ended there. Ah, but, not so fast. . . 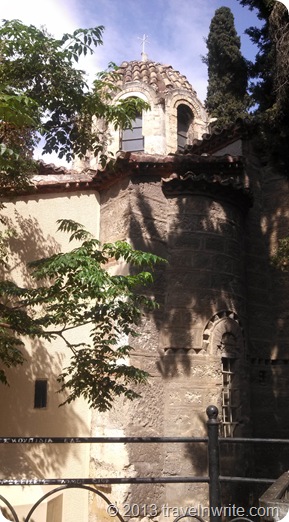 En route home, we spent a day and a half in Athens. Last Friday morning during a short walk near our hotel we happened upon a picturesque old church. 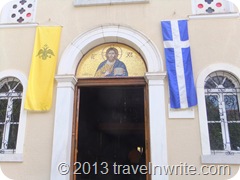 Entering, we found ourselves with three priests and another gentleman, (a church deacon or senior warden type, perhaps.)

So, I did what any shutter bug would do: I offered to take the photos.

By then, their camera battery needed to be changed and while we waited, the younger of the three clergy, who spoke perfect English, explained to us that the week following Easter was still considered Easter Week – the Easter service was performed each day from Easter Sunday until the following Saturday.

He told us about the church and its history – its murals dating back to 1100.  Then ‘the photo shoot’ began;  I took group shots and individual shots.  I took a quick one with my camera as well: 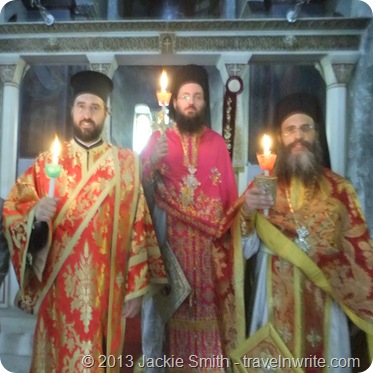 “Thank you,” the young priest said as we finished.  Then, as we were leaving, he called out,

“God Bless You! Christ has Risen!”

Yes, as I said, we may never experience an Easter like that one in Greece. . . 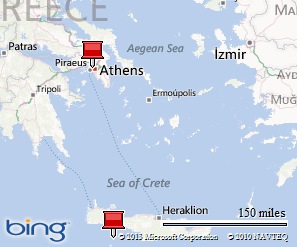 This is our contribution to Budget Traveler’s Sandbox, Travel Photo Thursday.  Head over there for more photos and come back to TravelnWrite for a few more Greek tales. . .
Posted by Jackie and Joel Smith at 9:20 PM