Hora Sfakia ~ On the Libyan Sea

I write today from Hora Sfakia a small harbor town in southwestern Crete overlooking the Libyan Sea.  Here we are  further south than Africa’s Tangiers, Algiers or Tunis. 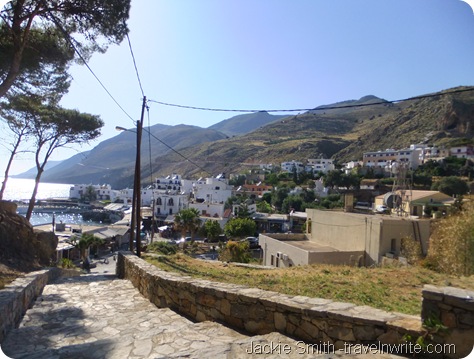 Our Greek travel itinerary was designed to include a return to this remote  little spot – our third time here -- where even after a three year absence we remember waiters, store owners and others we came to know during earlier visits. Much to our surprise, we too, have been remembered! 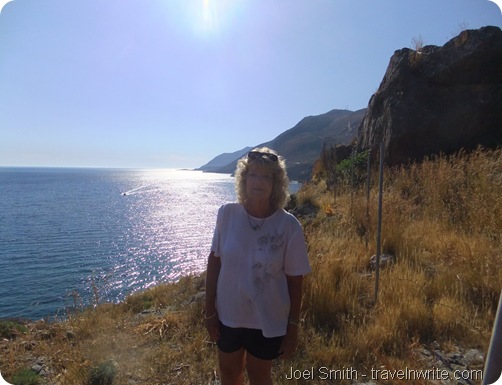 We are staying in the same hotel, Stavris, as we’ve stayed in previous visits.  It is a laid back place with basic rooms that are a favorite with the many hikers, backpackers and others who flock to this area for the hiking opportunities in the Samaria Gorge – the largest, longest, deepest gorge in Europe with walls 1,500 feet high in places. (We didn’t pack the boots or we would have also hiked the gorge this trip.)

So we’ve done some ‘urban’ hiking in this tiny town of 302 residents, but as you can tell by the photo above the in town views are pretty spectacular.  Only a handful of cars squeeze through the narrow streets so the only sounds we hear are children playing, and goat and sheep bells and their bleating songs  from the hillsides.

And speaking of views, this is the view from our room: 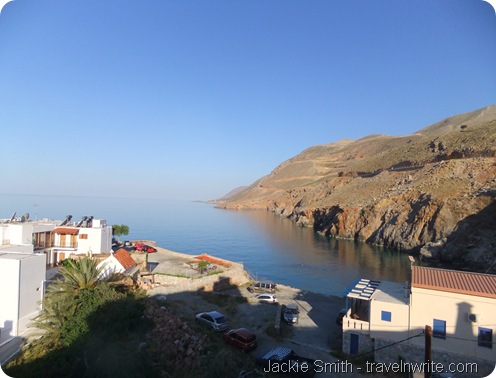 During the time of Turkish and Venetian rule, this town, being an important maritime center, was the nucleus of the Cretan struggle for independence. 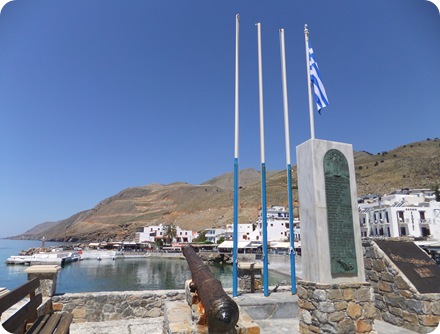 And Hora Sfakia played a major role in WWII because it was the place from where more than 11,000 Allied troops were evacuated by ships in the middle of the night over a four-night period the end of May following the Battle of Crete. This memorial commemorates that evacuation.

Further up the hill a memorial brings yet another war time remembrance.  The clear portion at the base of this memorial houses human skulls; those of local residents who gave their lives during the war. . . 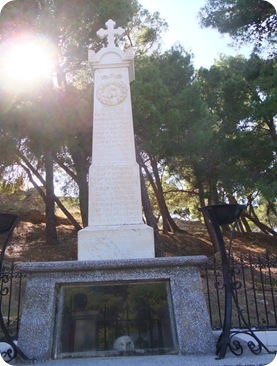 The plaque next to it reads: 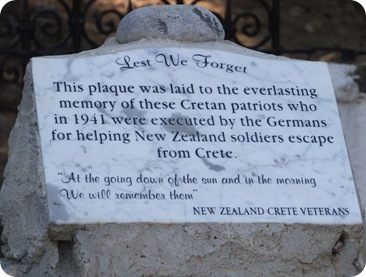 Our journey continues through Crete as we move further west this coming weekend. Hope you’ll continue traveling with us. Today is Travel Photo Thursday so head over to Budget Travelers Sandbox for more travel tales and photos.
Posted by Jackie and Joel Smith at 11:55 PM