Taking a slight jog from the Middle East, I am posting an article that appears in my drafts folder, that I had once published 'way back when' we took the trip. We used this post to introducing our then new Travel Classics feature on TravelnWrite .  Its focus continues to be historic hotels and other treasures we find along the way. . .
We couldn’t think of a better place to begin than at the iconic Hotel de Haro on Washington State’s San Juan Island. . . 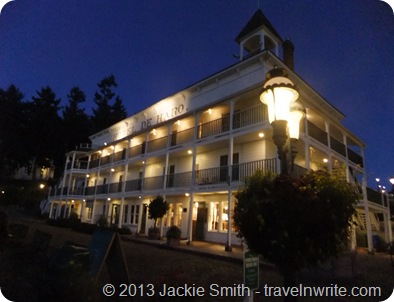 The hotel, overlooking Roche (roe-shhh) Harbor, was constructed around an existing Hudson’s Bay Post log bunkhouse in 1887.  You can still see portions of those old logs at the hotel’s narrow stairway that leads from the lobby to the guestrooms.

It is definitely a place built of both logs and legends. Like so many historic structures, we wish the walls could whisper bedtime stories to bring its history to life.  On that particular trip, I'd have wanted to hear more about guestroom 2A because that is where United States President Theodore Roosevelt stayed in 1906 while visiting his friend, John S. McMillin.

McMillin, in 1887, founded the Roche Harbor Lime and Cement Company. This hotel was built to house customers while they were buying lime. 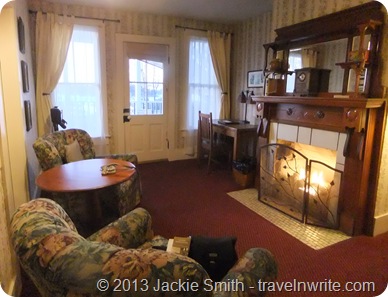 Today Room 2A is known as the Presidential Suite. It was in that room, with its sloping and creaking floors, that we spent two brisk autumn nights. Can’t you just imagine President Roosevelt sitting here more than a century ago? 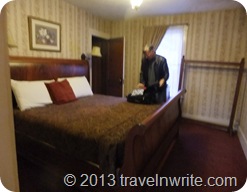 Our three-room suite, included an en suite bathroom behind the door on the left. There are two suites, each with their own en suites; other guest rooms share a bathroom. 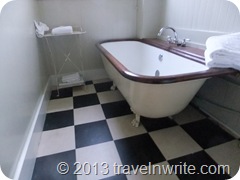 And even that common bathroom has history!

As the story goes, that famous Western movie actor, John Wayne, also stayed here and they say he bought the over-sized claw-footed tub (now found in the ladies bathroom) because that ‘cowboy’ was so large he didn't fit the tubs provided so bought the place a had a man-sized tub.

(And the McMillin kids learned to swim in it. . .as the story continues. . .) 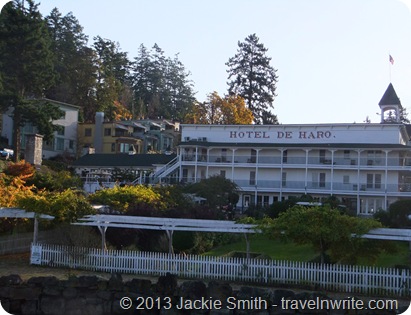 Hotel de Haro – once the only public accommodation on Roche Harbor-- is now nestled amid luxury (modern) suites, and even town homes (pictured in back).  All would be great choices for an island getaway, but when we return, it will likely be to that creaky, somewhat drafty Presidential Suite where we can wrap ourselves in the warmth of history again. 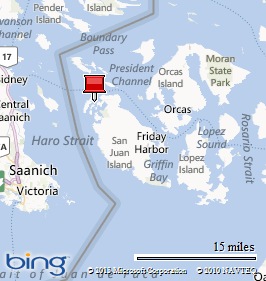 Washington State Ferries from Anacortes are an easy way to reach San Juan Island.  Anacortes is just over an hour’s drive north of Seattle. 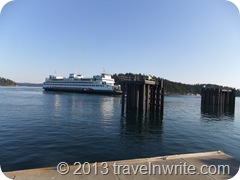 Roche Harbor is on the north end of the island and a few miles from the ferry landing. Public transportation is available. It’s also great for cyclists.


Hotel de Haro is not open during winter months.  We were there in November and our room was chilly even with the heat turned up and the fireplace going.  What is nice about the hotel is that it has never undergone major renovation to its interior. . .that means you give up some creature comforts (like temperature control) for one incredible step back into time.  However, our room was Wi-fi equipped. We paid 150 a night, plus tax.  Other accommodations at Roche Harbor are open year-round as is its Marina. 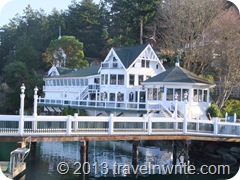 For information:  Roche Harbor Resort and Marina, 800-451-8910, www.rocheharbor.com, roche@rocheharbor.com
Tip:  Be sure to eat at McMillin’s Dining Room Restaurant (it’s housed in the building pictured).  This is another historic building – the McMillin’s former home. Four luxury suites  above the restaurant can also be rented.

Do you stay in historic hotels or do you prefer sleek, modern edifices? Have a Travel Classic to recommend?
Posted by Jackie and Joel Smith at 6:50 AM