Out Wickenburg Way ~ A Most Western Town

We were looking for America's Old West and found it in Wickenburg, Arizona.

"Wickenburg?!"  Long pause. . ."Are you sure?"
Several  friends seemed surprised that we planned to spend a night in Wickenburg, Arizona during our recent Southwest road trip.

We assured them that our fueling stop there on our southbound journey, had prompted our desire to further explore this place named for its famous German immigrant gold miner from yesteryear.

We spent the night in a basic, (somewhat pricey for what we got), clean room at the Best Western Rancho Grande, (293 E. Wickenburg Way) but its central location was perfect for setting out on foot to explore this once Wild West hub of a gold mining town.

A shopkeeper told us we were visiting at end of "Snowbird Season" referring to those folks from the north who head south like the birds seeking winter warmth.  Their numbers double the population, he said, taking it into the 10,000 range.

Calling itself "Arizona's most Western community" and located 55 miles north of Phoenix, we found there were so many historical and artistic layers to this little place that we will simply have to return because we didn't have time to see it all.  And here's why:

1.  For years this place was known as, "The Dude Ranch Capital of the World," and there are still several to chose from include the Flying E Guest and Cattle Ranch that has been hosting visitors since 1946.  Rancho de los Caballeros, now in its 63rd year of operation,  offers guests, "spikes, spurs and spa".  (Next time partner, we'll be headin' to a ranch!). 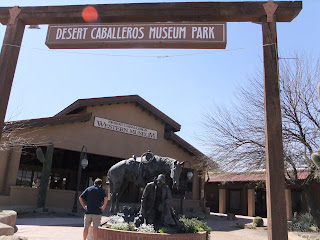 2.  The Desert Caballeros Western Museum (21 N. Frontier Street, 928-684-2272, admission is charged) is a treasure trove of Old West history and art.  If you have no other reason for stopping in this town, this Museum is reason enough.  This two-level treasure will time-travel you back into ranches and early Wickenburg; you'll have a sampler of Southwestern Indian arts and crafts, see minerals, learn about mining and cattle ranching.  (The art gallery wing was installing a new show and was closed - gotta see it next time.)

3. The Historic Vulture Mine, some 14 miles out of town, is where you can take a self-guided tour of the remaining buildings and mining site. For information, call (602)859-2743). (Didn't get out there this time.)

4.  The town sits on the banks of the Hassayampa River, one of the best remaining examples of a rare type of North American forests: the Fremont Cottonwood-Willow riparian forest. The Hassayampa River Preserve is on U.S. Highway 60, about three miles southeast of the town near mile marker 114.  (Coming from the rain-soaked Pacific Northwest it was most interesting to see a riverbed with no water in it.)

5. We don't golf, but for those who do, the 18-hole Los Caballeros Golf Club, built in 1949, is ranked one of the top five in the state of Arizona by editors of Golf Digest and their subscribers have voted the course as a must "Place to Play." Green fees range from $35 - $50. (Sounds pretty good to me.)

6. Oh yes, there's also the 600-seat Del E. Webb Center for the Performing Arts where entertainers from Jose Feliciano, The Sons of the Pioneers and The Canadian Tenors are among this season's headliners.

7. Eateries.. .oh, my!  A fellow tourist told us we 'had to have the ice cream'.  She was referring, to Tony and Pam Rovida's  Chaparral Homemade Ice Cream (T45 N. Tegner St., 928-684-3252) which has been around some 30 years. Homemade ice cream, hot fudge, chocolate and caramel sauces - not to mention pastries -- are served here.  I am pleased to say we were saving ourselves for a barbecue feast at the newly-opened Pig Trough on Wickenburg Way. (A trough, is what a pig eats out of, for those of you city folk reading this).  Suffice to say, it lived up to its name: we were piggies at dinner.

Perhaps the best part of this place to our way of thinkin' are the 'real' ranchers and cowboys.  Boots, blue jeans and cowboy hats weren't props for some theme-town.  That's the way the folks were dressed as they drove huge pickup trucks through town hauling horse trailers as long as an RV, carrying as many as a half dozen horses.

This place is America's West - and we struck travel gold when we discovered it.
Posted by Jackie and Joel Smith at 8:44 PM