Yes, we sure did miss Hoover Dam when we headed south in Ol' Orange, our trusty rental car.

How could we have completely missed one of America's Top 10 Construction Achievements of the 20th Century - the one 'must see' on my list? Well, I'll blame it on the newest construction achievement of the 21st Century:

The Bridge. This sweeping, spectacular dam viewing stand/traffic by-pass opened with great fanfare last fall while we were cruising the Black Sea. How else could we have missed the news?  So on our recent southwestern road trip we zipped Ol' Orange over the span so fast that we barely gave notice to the sign marking the turnoff 'to Hoover Dam'.    (Click the link for a great time lapse video of the construction.)

"Did you see the bridge?" "What was the bridge like?" asked our friends in Arizona.  Well, we sort of missed it as well, . . .I guess we did notice the line of tourists off to the side, safely tucked away from cars by its tall cement walls that created the viewing area overlooking the dam and Lake Mead.

Last time we'd seen this famous dam, built during the Great Depression in the early 1930's and once-named Boulder, was from inside our car as we crept across its crest on U.S. 93 a decade or so ago.  But that snaking, narrow roadway you see in the photo above was made history when the newest tourist attraction -- the Mike O. Callaghan-Pat Tillman Memorial Bridge opened Oct. 16, 2010. 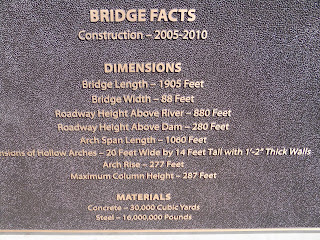 If-you-go note:  There are a number of tours from Las Vegas that will get you to the dam in a motor coach.  If you drive, it is an easy 25-minute trip from Vegas on multi-lane freeways.  Before parking we did go through a security checkpoint, but the wait wasn't bad with only a dozen cars or so in front of us on a mid-week morning. But parking at the bridge was already tight.  We followed the walkway to the bridge and when we left less than an hour later, the line of cars at security had grown to nearly 100 and snaked back up the access road, nearly to the freeway. (You might consider a tour instead of renting a car).
Posted by Jackie and Joel Smith at 7:26 PM