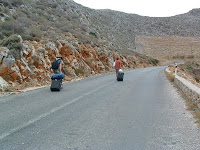 Actually our trip to Folegandros has proven that statement incorrect. . .we did sweat a lot, quite literally, on this segment of the trip. Folegandros, as I wrote before, is a Greek island we booked ourselves to pretty much on the basis of an article I had clipped from the Seattle Times and an outdated guidebook entry we read in Santorini. Folegandros is on the cusp of tourism with delightful small resorts, rooms to let and a selection of restaurants found in the maze of the Kastro, a maze of small alleyways past plazas, homes and businesses in what was once a Venetian village. We had been warned in Santorini that we might find limited accommodations here this late in the season.

We were among a dozen or so who got off the ferry at the port - most went to waiting cars. But five of us went in search of the bus - the one we all had read met each ferry. After 20 minutes the realization was clear that the bus that would take us up the 3.3. kilometer stretch to the town wasn't coming. Our band of five had made introductions while waiting and we consisted of a couple from Spain, a man from Australia and the Smiths.

At the news finally that the bus wouldn't arrive for nearly two hours and with rain clouds threatening, three of us decided to walk, make that hike, to the town. That is where the sweat comes in. Under cloudy skies, in muggy conditions we began the trek, looking much like donkeys as we pulled our suitcases like carts and laden with those ' lightweight' Bagallini bags, I've been bragging about throughout the trip. After 30 minutes I was trying to remember what the symptoms of heart attack or stroke areas my heart pounded and the sweat dripped. (sometimes being a traveler isn't pretty).

This photo is of Joel and our now new friend Rob from Australia. . .as we set off for town.
Posted by Jackie and Joel Smith at 9:59 PM

Email ThisBlogThis!Share to TwitterShare to FacebookShare to Pinterest
Labels: Folegandros