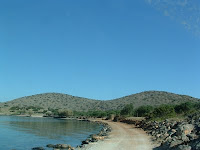 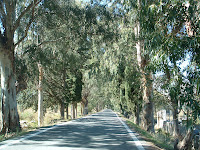 We've called this the trip with no set destinations, and it might now be best termed the Cretan Road Trip. We are at the end of three weeks here, our original thoughts were for a two-week stay, but we had underestimated the size and beauty of Crete. We are already talking about the need to return and visit the mountain towns we haven't yet seen, and return to our favorites we''ve found along the way.
The road trip has been fantastic - but it is not for the faint-hearted. There is a single national highway here that links the west and east coasts. Then there are main roads and then secondary and then dirt. The roads leading over the moutains are two lane roads, most paved, some with guardrails, and some without these are main roads, all good - once you get used to the pavement width, and sheer drops to the side. The roadways are like ribbons looping and twisting down sharp inclines. . .the cars are all small - thank goodness. There are some turns that are so sharp, you shift into low, coast around corners and brake - praying that a bus or large truck isn't coming the other direction.
Tourists and locals all seem to respect the dangers of the roads so they drive responsibly. We had only two instances of thinking the car coming at us was losing control and might take us over the edge with him. It obviously didn't happen.
Our steepest, curviest road looked rather straight on the road map but had me putting finger imprints into the passenger door and seat before we finished the wind down the hill. We also followed one coast road that had appeared on the map as a dirt road but was nicely paved if not somewhat narrow with a drop over the cliff into the crashing waves. . .we were feeling pretty smug, until we rounded a corner and found that the paving hadn't been quite completed. It made for a tense few kilometers but a most spectacular vista spread out before us as each turn (and thank goodness we met no other car on that stretch).
We've dozens of photos taken from the passenger seat but the two I am including show a fabulous stretch of road we found on a plateau high above us - another winding no-guardrail road got us there. The other was coming back from the beach yesterday. There was water -and road.
Posted by Jackie and Joel Smith at 1:15 AM