Kalimera (Good Morning) from our home away from home in Chania, Crete. We arrived here mid-afternoon Wednesday per our earlier schedule of British Air to London Heathrow, 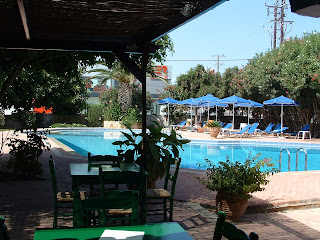 followed by an overnight at the Courtyard Marriott, walking distance to Gatwick Airport, followed by a 7 a.m. flight to Heraklion (Iraklion). Our rental car arrangement worked like a charm. A fellow met us at the Crete airport, took us to the car and within 15 minutes of arriving we were on the road to Chania.

Driving here is as interesting as driving in Mexico. . .here they pull partially on to the shoulder and stay partially in the right lane to alert you that you can pass - on hills, curves, straightways, it doesn't seem to matter much to them. On coming cars do the same so the problems arise when the two passing cars in opposite directions both need to be partially over the center line. Keeps the drive interesting to say the least. And as we had been advised, we do not need International licenses to drive in Crete.
Our Lefka apartments really are as nice as all those Trip Advisor reviews kept telling us they would be. We are in a studio, with well equipped (dishes, utensils, microwave, two-burner stove, refridgerator, coffee pot and hot water pot) kitchen, couch, television, two twin beds put together, small but spotlessly clean bathroom and we have balcony that looks out over the pool.
I took the photo an hour ago while sipping fresh squeezed orange juice. . .
The grounds of this 16-unit building are an oasis in this bustling city. The gate leads under an arbor of bouganvilla in full bloom, past canna lillies, towering pandamus, a lemon tree and roses. The pool bar is where we dined last night -- I had pork souvlaki and Joel the bbq'ed swordfish -- served with Greek potato salad, french fries and Greek salad, for 7E and 8E, respectively. Too much for a single meal so will dine on it again tonight. Our complimentary dessert of Greek yogurt with a dried cherry cinnamon sauce was served with muscat wine.
Posted by Jackie and Joel Smith at 3:33 AM