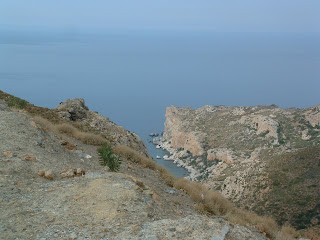 Our first week is coming far too quickly to an end. We've taken the advice of Andres, our co-manager/host at Lefka Apartments and taken the off-the-beaten-path roads to places where the tourist buses don't, actually couldn't go, because of the narrow roads and hairpin turns along the way. Think Hart's Pass in Mazama or the Amalfi Coast in Italy. Our little Renault, a car the size of Herbie my VW, is about as big as one would want to be in on the single lane roads that lead through a gorge darkened by the cliff overhangs to heights that are so dizzying that you really don't want to look down from the guard-rail-less road carved out of the rocky hillside to the drop below. The island's Samaria Gorge is popular with hikers and a well-known tourist destination, but our travels through Therisso Gorge only a few kilomters from Chania was pretty spectacular. The roadwayloops its way up hillsides in hairpin turns so sharp that you breath a sigh of relief to have successfully navigated them.

The rocky hillsides are covered with vast amounts of olive groves and goat herds -- many herds chose to lay in the roadway or at its side; it wasn't unusual to make a hairpin turn and find ourselves looking eye to eye with one or two goats. The silence of the hills was broken only by the sound of their hollow tinkling goat bells.
Posted by Jackie and Joel Smith at 10:38 AM