Nanaimo – a harbor town on Vancouver Island’s east coast with a name that sounds like a children’s chant:  “na-NI-moe” and rhymes with ‘the wino’ -- seems best known in this part of the world by the dessert bar that carries its name. 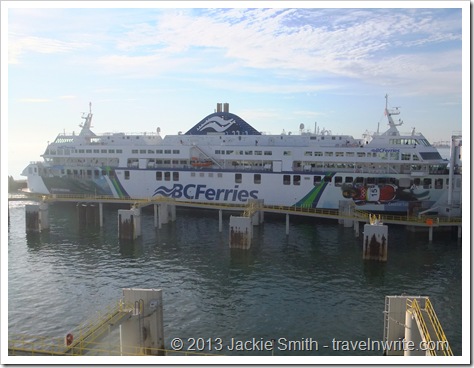 That’s pretty much what we knew about the place when we set sail aboard a BC ferry headed to it on a recent September Sunday afternoon.

The city, which served as both our entry point to the island and our departure point for a road trip across it, has a long rich history, Archaeologists have traced its beginnings back 3,000 years. It was once home to migrant coastal Salish (First Nation people) called Snuneymuxw (pronounced Sna-nay-mo), we learned along the way. By 1852 coal mining was a thriving activity and that led to its nickname, "Black Diamond City."

Because we weren't arriving until evening, The Scout had found us a hotel on Expedia the day before we left, that was both a good price, had large rooms and small balconies, from which we had a view of the harbor and a tiny view of the city’s Old Quarter.

We also had a view of  The Bastion. Built in 1853, Nanaimo’s oldest building – one of the oldest in the province – and an original Hudson’s Bay Company Fort.

These days it’s pretty small compared to our hotel across the street, but back when it was built, it served as the center of this coal mining settlement.

We set out to find breakfast and explore the Old Quarter before commencing our road trip.

So come along with us while we tell you a bit more about this wonderful town:


Nanaimo, home to about 82,000, is 70 miles (113 kilometers) north of Victoria. Its gently curving Commercial Street is lined with turn-of-the 20th Century buildings among them Art Deco, Edwardian and one of our favorites, the columned Classical Revival styled National Land Building, built in 1914 during a coal mining strike.

With far too many ‘cute cafes’ on Commercial Street from which to choose, we opted for Tina’s Diner.  Its décor was irresistible and clientele obviously regulars.


Needing a bit more exercise before hitting the road, we walked a few blocks more to see the town’s former train station – now home to an eatery. 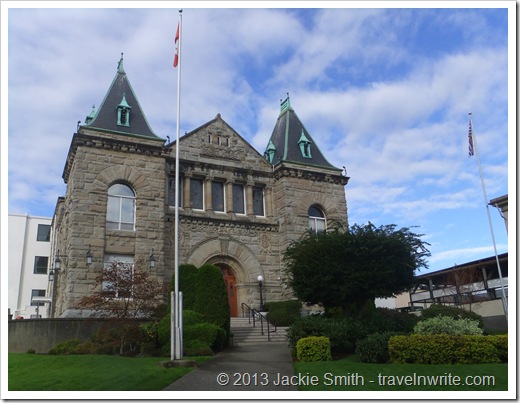 And then back around to its still functioning Courthouse, near the harbor. 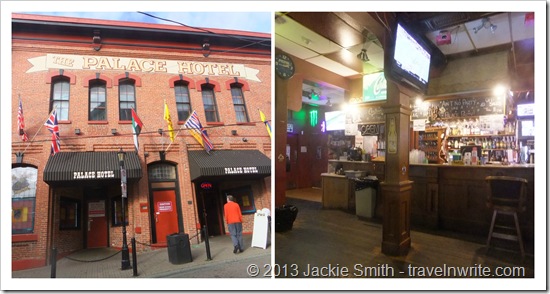 Had we stayed longer I am certain we’d have had to sipped a cool one at this fun place just a couple blocks from our hotel, but as it was mid-morning, we only toured  its charming old interior – and vowed to return. 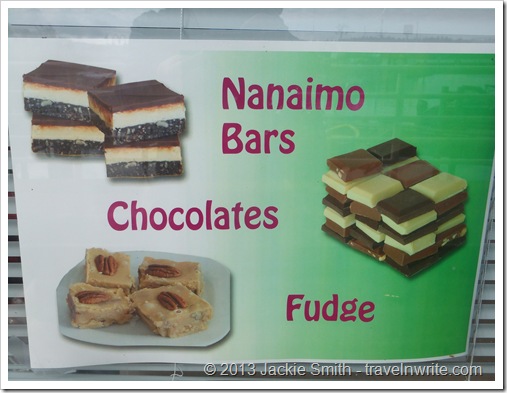 Nanaimo is surrounded by golf courses, has a beautiful pleasure craft marina and has been named one of the best scuba diving destinations in North America.  Since 1967 it has been home to the World Championship Bathtub Races (yes, contestants race around the harbor in bathtubs).
But that triple-layer sticky sweet pastry – the Nanaimo Bar – seems to remain  the iconic symbol of this town.

Don’t tell the tourism folks, who’ve actually published a directory of where to sample them during your visit – but this sign is as close as we came to seeing one, let alone eating one!

However, I did find a recipe for Nanaimo bars and a Nanaimo Bar Trail Map on this link  for those of you in need of a shot (a big shot) of sugar.

That’s it for Travel Tuesday this week.  Next week we’ll show you the other side of Vancouver Island – and give you a tour of the place where we stayed.

A great source of information for Nanaimo is Tourism Nanaimo.  (Thanks to them for this great map!).

Click  BC ferries for schedules, destinations, prices -
Posted by Jackie and Joel Smith at 7:01 AM