A Plate of Hawaiian (Tourism) ‘Pupus’

Pupus, Hawaiian for appetizers – those small delicious tidbits that provide a sample of the flavors of the islands.

Since our arrival in O’ahu we’ve picked up quite a bit of pupu-sized bits of tourist news.  I’m serving up those up today to give you a taste of what’s happening here and what’s planned for the future: 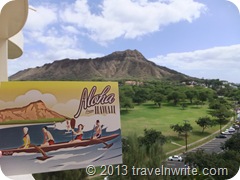 Remember the Aqua Lotus hotel I said we’d planned to return to this year until its rate increase drove us elsewhere?
It is among those properties that will be re-branded as Aqua Hotels and Resorts becomes  Aqua Hospitality, restructuring the 24 properties they manage into three distinct brands:  Monogram Hotel Collection which will move their best properties into  boutique, luxury experience places; Aqua Hotels and Resorts will be aimed at the mid-price-range traveler who wants style, service and value and their Lite Hotels will provide economy accommodations to the 'budget-minded visitor'.

Hilton Hawaiian Village plans to spend $700 million to add two towers with 550 timeshare units on its 22-acre site. There’ll also be new swimming pools, retail shops and parking.  The 37-story tower is to be completed in 2015 and a 25-story tower some five or six years later. 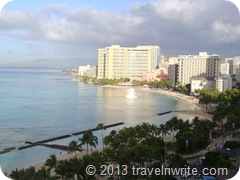 Kyo-ya Hotel and Resorts plans to replace an eight-story wing of the Moana Surfrider with a taller building and that is just part of a $1 billion planned renovation or replacement of each of its Waikiki properties (Sheraton Wailkiki, Royal Hawaiian Resort, Princess Kaiulani Hotel, Ainahau Tower and a new 34-story Pikake Tower).

Tourism is hitting record numbers again – evidence that the recessionary pullback by travelers in 2008 and 2009 may be over. We can tell you Waikiki sidewalks, beaches, bars and streets were packed with tourists during our brief stay there – we do wonder where those staying in the new timeshare and hotel rooms will find to sun on a beach or sip in a bar or the other limited common areas of this famous section of town. . . 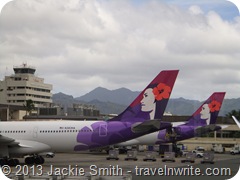 Perhaps some tourists will be steered from O’ahu when Hawaiian Airlines adds 25 new long-range airplanes between 2017 and 2020 which they will use for nonstop flights between neighbor islands and the 10 West Coast cities it already serves.
And speaking of other island’s and airlines. . .

Our final pupu is that billionaire Larry Elison (co-founder and CEO of Oracle) is rumored to be the undisclosed purchaser of Island Air, a small interisland airline.  Last year he purchased 97-percent of the island of Lanai (yes, that’s correct – nearly the whole island). Lanai is the state’s sixth largest island with a population of just over 3,000.
Posted by Jackie and Joel Smith at 10:33 AM