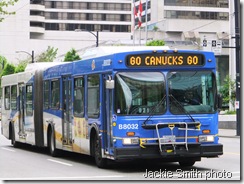 When the city’s public buses start cheering for the team, you know the place has gone nuts over its ice hockey heroes.

The Canucks are in the playoffs to win the coveted Stanley Cup and the seven game race peaked Friday night in the neighbor to the north.

We arrived mid-day Friday and roads in the central area were already being closed for anticipated fans. (We are here so that I can attend TBEX 11, a writing conference for travel bloggers).

The town’s decked out in Canuck Blue – from flags on buildings to people wearing jerseys. Wafting scents of marijuana punctuated our stroll along the waterfront and around our hotel. 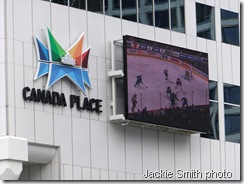 The craziness peaked Friday night when the Canucks managed to score the only point in the game against Boston.  Even the diners/drinkers in the Renaissance Harbor side's restaurant/ bar went nuts when the buzzer marked the end of play – and we cheered right along with them. 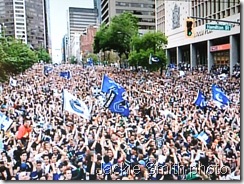 An estimated 70,000 jammed the streets surrounding the rink and many didn’t leave until police shoo-ed them away at 4 a.m. to re-open roads.

It’s a great time to be here.  I’ll get back to cruise and Madrid tales soon, but not until after I tell you five ways to get high in Vancouver,  B.C. – that’s coming next.
Posted by Jackie and Joel Smith at 7:58 AM

Email ThisBlogThis!Share to TwitterShare to FacebookShare to Pinterest
Labels: Canucks, TBEX11, Vancouver BC