Tapas: A Taste of Madrid 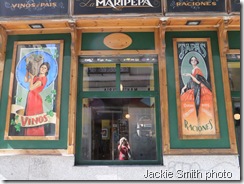 After filling our days with on-foot explorations, we couldn’t stay awake long enough to try out  Madrid’s Midnight dining hour but then we wouldn’t have had room for it after conducting our regular tapeo.
Tapeo, the early evening stroll between tapas bars for glasses of Spanish wine and tapas, for which the stroll is named,  is intended to provide sustenance until dinner – but we made it dinner. 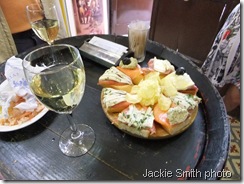 At home we’d call these small plates’ appetizers’. In Madrid they were tapas, or canapes, a slice of bread with a tasty, cheese, meat or seafood topping, and larger servings of each being called  a ‘racion’.
We’d studied up on this practice of cheap eats  by reading advice of  foodies who had gone before us; learning the wine servings were small – allowing for a half dozen stops before feeling its impact – and tips for tapa-eating etiquette like ‘throwing used napkins on the floor and keeping toothpicks to show the bartender how much you’ve consumed.”
We quickly learned don’t believe everything you read. Savvy shop owners poured large glasses of wine as pictured (which I think they’ve learned keeps you eating there longer). And they’ve gotten tired of cleaning up dirty napkins – as every place we visited had strategically placed garbage cans at the bar.
The food was good – but it wasn’t always cheap eats by any means. Part of that impact of the U.S. dollars’ weakness to Spain’s currency, the Euro).  The rate of exchange was  1-Euro=$1.45US.
Too late we learned that Manchego, their famous cheese is about as high priced as is their famous Iberico acorn-fed ham. 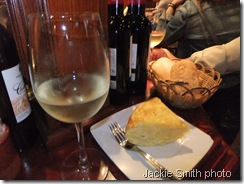 Our first night out we each had two glasses of wine, a shared a ‘tortilla’ – a thick open faced omelette stuffed with potatoes --and then ordered a cheese and ham plate (both are pictured here).
Our bill was $27-euros or about $43US. 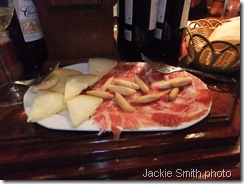 At one place we tried the 2-euro ($3.20) tapa of the day and received a toothpick on which two bite-sized green peppers were wrapped in an  anchovy.  The most economical was the canape – most of which were $2.50-euro, depending on the topping chosen. 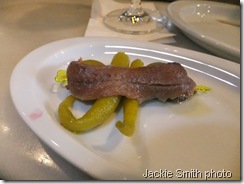 Note:  If these make your mouth water, just wait until I tell you about Celebrity’s Gourmet Galley. . . and then I’ll give you an update on D2G, our Diet to Go. . .
Posted by Jackie and Joel Smith at 9:53 AM