So, who dines at The Captain's Table?

Have you ever been on a cruise and wondered who was dining at "The Captain's Table"?
I have.

My curiosity came long before I ever cruised. . .way back when I'd watch the rich and famous munching along with Captain Merrill Stubing on the Love Boat , the popular American TV sitcom that aired from 1977-1986. (Click the link for a taste of the show)

Now many cruises -- and dinners -- under our belts later, we still don’t know who dines with ‘the’ Captain, but we've got a better idea of who dines at the Captain’s Table, at least on Celebrity cruises: they are normal people just like us!  In fact it was us.  . .not once, but twice, on the Solstice. And this is how we ended up there:

Prior to our sailing, I had arranged to interview some of the ship's staff for this blog. Celebrity reps also arranged (unbeknownst to me) for us to participate in activities and events usually available to those in Celebrity's frequent cruiser loyalty program, Captain's Club (think perks, like airline frequent flyer). Among the invites was one to dine at  the Captain’s Table being hosted by Environmental Officer James Mitchell (center of table below). 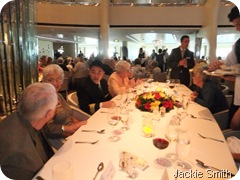 We joined three other couples -- all who had logged many cruises in their travel journals and who kept the conversations lively with travel tales, restaurant and destination recommendations and of course, cruise stories. Officer Mitchell met us in a lounge where we sipped pre-dinner champagne and then led us to The Captain's Table which on the Solstice was in the middle of the main Grand Epernay dining room. (pictured above). 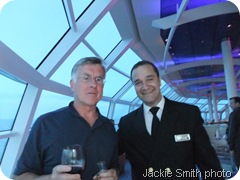 A few nights later at a cocktail party for Captain’s Club  members we met Staff Captain Panagiotis Kiousis, the second in command of the ship and part of the Bridge Team.  He divides his time between the ship, his California home and his home in Spetses, one of Greece's Saronic Islands; an island where we had spent a few days last fall.

We three decided to meet for coffee some time during our Atlantic crossing to talk more about Spetses. Instead, Captain Kiousis called and asked us to join him at the Captain’s Table the night he hosted it.

We'd learned that on long sailings like the one we were on, the officers all take turns hosting the table at each of the evening's two seatings and guests at the tables are invited for any number of reasons.

On the appointed night we joined other invitees for pre-dinner drinks; among them, a lady born in Greece, and a couple who’d dined with the Captain on a previous cruise. But our host was a no-show. . .thanks to the Spaniards work slow down in Malaga that day:

Donna Trembath, who organized all these type functions on the Solstice, explained that our host was on shore with the Captain trying to get our remaining passengers there back on board and through some dreadfully long - purposefully s-l-o-w - security lines. 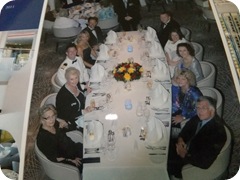 So, in stepped our Associate Hotel Director Tom Brady at a moment’s notice to host our group. The ship's operations are divided between the Captain's 'get us there' side and the Hotel side to keep us comfortable and busy while getting there. Tom was second in command of the Hotel side of the cruise operation.

While we're sorry we didn’t get to 'talk Greece', but we, again, had great dinner companions and a fabulous time.

Now that we've completed our first cruise on Celebrity, we are members of the Captain's Club. . .and it will take a few more cruises with them to get us back to the Captain's table but we will get there one day. And someday I will answer the question, "Who dines with the Captain?"
Posted by Jackie and Joel Smith at 3:58 PM