If you were a youngster in the early 60’s then the title alone should spark a memory of  that dark-haired beauty, Connie Francis, singing and searching for romance on Florida's beaches during a spring break romp in a movie named, what else? “Where the Boys Are”.

Movies --for a kid like me growing up in Yakima, Washington – were an introduction to the world; a time travel to places I hoped to visit when I grew up.  I’ve already told you how Hayley Mills in Disney’s “Moonspinners” kicked off what was to be my adult-life love affair with Greece.

In much the same way,  Where the Boys Are, created a magical image of  Fort Lauderdale; actually, anything, Florida. 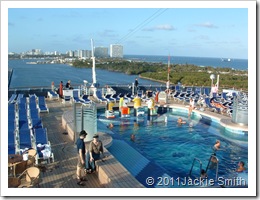 Now  decades later, I’ve been to to Fort Lauderdale a few times; usually a late-night arrival to catch a cruise ship the next morning.

We’ll soon be heading there to catch our Celebrity cruise.  This time, though, we are spending a few days on the Florida coast.

Unlike those dreamy, starry-eyed teen years, I am  no longer hoping to find my true love there as Connie so skillfully planted the seeds of hope so long ago - he’s coming with me.

But at some point under that Floridian sun, I’ll be humming that song, thinking of Connie and back to a time that my friends and I watched. . .and watched . . .and watched that film over and over again.

Connie and others like her in those movies planted the seeds for our futures: romance and travel, success and happiness. Isn't it funny how just hearing a song from one of them now can take me time traveling back through the decades to the time my friends and I were lost in the land of movie magic?

Note:  If you don’t recall the movie or need a refresher course, click on the link above, as it will take you to a great video posted by glamourous888 on YouTube. Happy Memories!
Posted by Jackie and Joel Smith at 9:05 PM