No matter where we go, we try to use  public transit as much as possible. And kudos to Hollywood/Ft. Lauderdale for offering some great  public transit and tourism  options, including a great water taxi.

We headed north to Ft. Lauderdale one afternoon traveling  the Intracoastal Waterway on the Water Taxi  catamaran.  Tickets are $20 ($16 for seniors, 65+) for a full-day pass.  Although their posted schedules were loosely adhered to, we filled an afternoon exploring but a small section of this 3,000 mile waterway that links Norfolk, Virginia to Brownsville, Texas. We learned it has once stretched from Maine to Texas and was built during World War II as a safe means of getting our war ships repositioned. 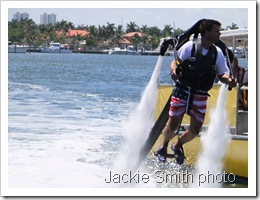 Our crew pointed out nature and history, along the way but the most unexpected sight occurred just as the taxi was pulling in to pick us up: two docks south a man literally jetted out over the water. A Kodak moment for all.

We went through Port Everglades where Holland America’s Neiu Amsterdam was the only ship in port and later watched it head out to sea. 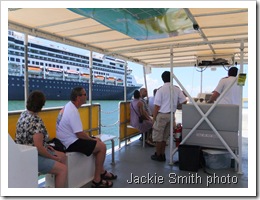 We transferred to a Ft. Lauderdale taxi just past the port and in typical tourist fashion, photographed  mansions and yachts belonging to “‘the other half’” en route to Ft. Lauderdale Beach. . .you know, the beach in the movie I’ve been telling you about.  More on that next time.
Posted by Jackie and Joel Smith at 6:08 AM