I was in need of a big city Christmas. While I love my Greek village life and its laid-back approach to the holidays, sometimes I just need that shot of holiday hype that only a big city can provide.

The Scout -- who doesn't share my Christmas-hype fervor -- is always up for an outing.

And that is why we headed to Thessaloniki the weekend before Christmas.

Thessaloniki, (thess-ah-lo-nee-kee) Greece's second largest city, with a population of just under 814,000 people, is an hour's flight away from Kalamata. It is an hour's drive from our house to Kalamata, so a trip to this wonderful seaport city in northeastern Greece, takes about the same amount of time as driving to Athens.  It is a vibrant place with museums and historical sites, high end retail, and culinary delights. The best part is that it is a most walkable city.

There are limited flights between the two cities this time of year, Ours, a tiny ATR aircraft stuffed with 72 passengers, arrived on a late Saturday afternoon.  Traffic was gridlocked as we entered the city. As the taxi driver eased us through narrow back streets to reach our hotel, he would cross himself as we passed churches and then roll down his window and shout a favorite Greek obscenity to anyone blocking his route. 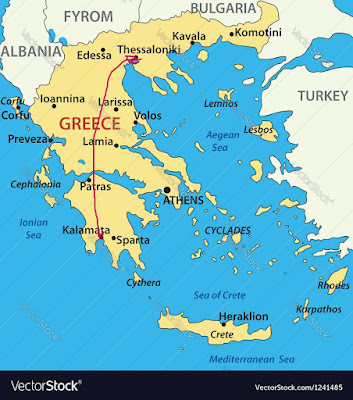 That congestion reminded us that we were certainly in the big city, a far cry from our village where traffic jams are caused by goat or sheep herds sauntering from one feeding area to another. The next clue that we'd left our rural world behind was when we set out seeking food and drink. You remember I said it was the Saturday before Christmas and the town was pulsating with people.

Not in Kansas Anymore

To paraphrase Dorothy's comments in Oz, it didn't take long to realize we weren't in Kansas anymore. We've forgotten what a Saturday night, especially the one before Christmas, and the one following two years of Covid curtailments, could mean in the big city.

In the village this time of year, when we dine out the questions we ask is if the taverna, cafe or restaurant is open. We don't even consider making a reservation. . .because sometimes we are one of two occupied tables wherever we end up.

So having settled into our room we set out for drinks and dinner in the big city, without reservations. We did call a restaurant, recommended by friends who'd lived in this city for a time, asking if we could dine there in a few hours. Not that Saturday, they were booked solid.

So, we headed to our favorite bar at the side of Aristotelous Plateia and was again turned away - it was full, reservations required even in its massive patio area.  The waitress took pity on us and found two chairs on the sidewalk near a bar table so that we could enjoy the sights and sounds of that vibrant part of town.

We decided that we'd eat in the hotel, at the bar, something casual.  Our hotel bar was also busy but luckily two seats, literally at the bar, were empty. As we approached them, the waitress stopped us with what was becoming a familiar question, 'Do you have reservations?'  We didn't and the bar seating required them.  Staff finally set up heat lamps at a courtyard table where we had a delightful pub grub dinner. The phrase 'country bumpkins do the city' came to mind.

We were last in Thessaloniki three years ago for my mid-summer birthday. It had been hot, very hot. We'd not visited in winter so were prepared for the worst of weather scenarios - it can, and does, get cold in Greece in winter. However, the weather gods were with us. Only one of our three days was windy, rainy and cold.

We had visited several museums on our last trip, so this trip's purpose was for experiencing those city sidewalks dressed in holiday style. The city didn't disappoint. We explored Greece's multi-storied department store, Attica, and the newly opened Municipal Market (more on that in a future post).

Our subsequent two nights, Sunday and Monday, were far easier to get into restaurants and bars.

The streets were crowded but easy to navigate.  We have not worn masks for many months now and the majority of people were not wearing any - inside buildings or out.  Employees and servers were in most cases masked up.

Thessaloniki isn't known - for that matter, nowhere in Greece is known -- for those cute seasonal Christmas markets like those that spring up in cities in more northern European countries.  We did find a small one just opening up on the rainiest afternoon of our visit. The weather didn't deter little ones from riding the merry-go-round though! (And yes, I was tempted.)

I think that my favorite Christmas decoration was the lobby tree in our hotel.  Made of simple bare branches and illuminated with white lights, small glass crowns and apples, the thing was stunning.  It drew me over to it each time we came into the hotel.
But the tree wasn't the only remarkable thing about this hotel - the whole hotel concept was pretty remarkable.  It was inspired by the monastery next door.  And that is worthy of a whole article which will be coming your way soon!
Our long weekend went quickly, and we were soon back on that small plane flying to Kalamata. Long-time readers know I am a white knuckler so you can imagine me as I buckled up, on our flight out of Kalamata and realized the only exit doors were two at the back of the plane. We were seated in row two in the front where small windows were clearly marked as our means of emergency exit. So, when I write that I love Thessaloniki so much I would get back on that plane again, you know I am seriously enamored with that place!
The time has come, with only a couple days left in this year, to wish you all a healthy, happy New Year. May your travels be safe and the memories you make, warm and wonderful. We thank you for joining in on our adventures and appreciate the time you spend with us.  Your comments, emails, suggestions and tips are simply what makes TravelnWrite so much fun to produce!  See you next year ~
Posted by Jackie and Joel Smith at 8:13 AM