Booking it to Kalymnos Island

'Charmian Clift!!' I exclaimed a bit too loudly when I saw the poster.

My outburst managed to stop George Hatzismalis, head of the Kalymnos Municipal Tourist Office, in his tracks on a Saturday morning in June as he was setting up a poster announcing a special event honoring her. 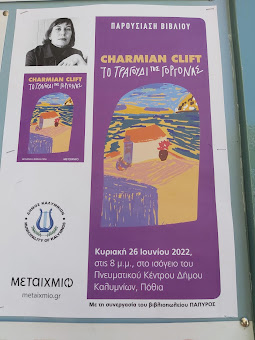 'You know of Charmian Clift?' he asked in a somewhat skeptical tone, nodding to the poster he was putting up.

Here, being the island of Kalymnos, the Dodecanese Island off the coast of Turkey, known for its sponge diving history.

'Are you Greek or part Greek? he asked, still not quite believing I knew what I was talking about. 'No, not Greek, but we live here.' I answered, explaining we were American expats living in the Greek Peloponnese.

'But, yet, you know of Charmian Clift?' he responded, adding that many Greeks didn't even know of the Australian author who had lived on the island back in the mid-1950's. So, he seemed surprised that an American might have heard of her. Not only had I heard of her, but I had also sought out her books last year on learning they had been re-issued.

Her book, 'Mermaid Singing' is about the year she spent on Kalymnos with her author husband, George Johnston, and their two children. 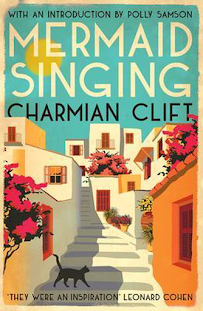 I really had him when I said I was reading her book for the second time and had brought it with me on the trip.

This was our second visit to the island this spring; our first had been to research for a piece I was writing for The Mediterranean Lifestyle magazine. It is in the August/September edition published a week ago. Her book sparked my interest in learning more about the sponge diving history of the island and of subsequently writing about it.

It didn't take long for a combination of the island's ambiance and the warmth of welcome from its residents to make us vow to return after that first visit. So, when we found ourselves back in the Dodecanese islands a couple months later, we included another brief stop on Kalymnos. It was during that second visit we saw the posters for the upcoming event.

During both visits, we had based ourselves in the charming SpongkalyA apartments.  And as it turns out. . .

. . .we were just around the corner from the place where Charmian and her family had lived on the harbor front in the 1950's.

There's a gift shop on the street level of the rather faded building in which Charmian and her family lived during their year on the island. The harbor has been filled since their time here. Motorcycles in the photo are parked where the waves used to lap the shore. On our first visit we had to guess at the location of her former home, but this time George confirmed we'd found the place and noted that as part of the special event, an informational plaque was being placed on the building.

We had non-refundable hotel reservations on the next island so left the next morning, missing the event that evening - a gala affair to celebrate the launch the Greek edition of her 1955 book, 'Mermaid Singing'. Speakers included Nadia Wheatley, author and biographer of Charmian Clift as well as the Australian ambassador to Greece. The English language version of the book had been re-released in Sept. 2021.

Her time on Kalymnos was brief, only a year. We sometimes find expat life challenging now even though we are surrounded by so many creature comforts - I can't imagine the challenges of living on an island in the mid-20th century. It was a place that didn't yet have roads; where you climbed foot paths to get to other areas.

Following their Kalymnos stay, the family moved to the island of Hydra, where they lived from 1955 to 1964; a time when bohemian life reigned and they were the center of it. It was a gathering place for artists, writers, dreamers and other creative souls, the likes of which included Leonard Cohen.  Charmian wrote of that experience in her second memoir, 'Peel Me A Lotus'.

Charmian introduced me to Kalymnos and enhanced my view of Hydra. That is one of the best parts of reading about other people's real-life experiences.  I always say, Frances Mayes, planted the seeds for living an expat life in her book, 'Under the Tuscan Sun'. Of course, Peter Mayle added to that with his, 'Year in Provence'. David Mason is partially responsible for getting us to the Mani, where we now live, thanks to his book, 'News from the Village'.
Have any such books influenced you to travel or to take a step into expat life? Or where have such books taken you on your armchair travels? Send us an email or tell us about it in the comments below.  As always thanks for stopping by and spending a bit of time with us.  Hope to see you back again soon. . .and a big welcome to our new subscribers!!

Posted by Jackie and Joel Smith at 6:49 AM