They came to the island because they were dreamers and drifters; artists who set up residences more than a half century ago on this small island in the Aegean Sea. They came because they wanted to 'live differently' - far from the conventional lives they'd left behind.

"Living differently" is a phrase I often use when trying to explain why the expat life appeals to so many of us.  It is a life that has drawn those who want more life and cultural experiences than that which our former lives afforded us.

But this post isn't about our expat world. It is about a group of writers and artists who made up a Bohemian expat world back in the mid-20th Century; those who lived and whose creative spirits were inspired on the island of Hydra, one of the Saronic islands, just off the coast of the Peloponnese. Back then it offered an escape to the 'exotic' at prices that could be paid by struggling artists.

Regulars at Travelnwrite know that we are among the present day dreamers and drifters who are drawn back time and time again to Hydra, only 25 minutes from the mainland by water taxi.  I'd like to say it was the spirits of those long ago Bohemians that call out and inspire us to return, but in fact, I knew little of these free spirits until I began writing an article about the island for The Mediterranean Lifestyle magazine.

So interesting were the lives of these creative souls -- some who would become quite famous in the  visual arts, musical and literary worlds - that I found myself enjoying the researching them as much as I did writing their story. Their presence is an important piece of the island's history. And I am purposely not naming them in this piece so that you'll be tempted to follow the link below and read the article I wrote.

When we return (hopefully this year after lockdown ends) I will be seeing the island differently, thanks to the stories of these adventurers and early day expats in Greece.  For those who aren't only a road trip away as we are, I hope you will follow this link and take a quick armchair getaway to a Greek island in the sun: Hydra, A Bohemian Escape

And for those who want even more of a getaway, both in time and place, I highly recommend the book written by one of those Bohemians about life on the island of Hydra in the 1950's. It has just been re-released and makes for a great summer read. 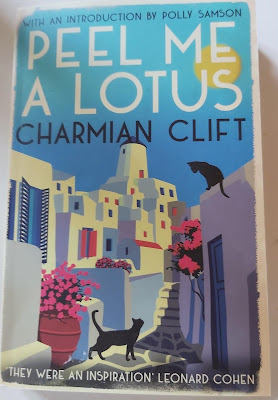 That's it for this week. I am keeping this post short as I hope you'll take a few minutes to read the article I wrote about this special island.

It is Holy (Easter) Week in Greece, the week between Palm Sunday and Pascha (Easter). Because it is such a celebrated holiday here, the country will remain in lockdown until Easter Monday, May 3, in hopes that large gatherings of celebrants won't become super spreaders of Covid. On Monday restaurants will finally be able to reopen for outdoor dining and drinking. It will be a few days short of six months - we are all eagerly awaiting the gradual steps which will reopen our world.

As always, thanks for the time you spend with us ~ Stay safe.

Posted by Jackie and Joel Smith at 6:56 AM