Budapest Noir ~ House of Terror and other Horrors

On a crisp sunny November morning we set out on Budapest's famed boulevard - Andrassy Avenue -- a stretch of road dating back to 1872. Today's roadway is lined with elaborate facades on the exteriors of Neo-renaissance mansions and townhomes.

Strolling on its wide sidewalks we passed name-brand designer stores, fancy cafes and restaurants that are the street level occupants of those stately old edifices. Notable addresses along the street include the Hungarian University of Fine Arts and the State Opera House.


The bustling route -- such an upbeat and pleasant part of the city -- was recognized as a World Heritage Site in 2002.

A stop at a bookstore along the way resulted in the purchase of a murder mystery set in the 1930's penned by a Hungarian writer, its title 'Budapest Noir' .

Thinking back on it, the title was an appropriate foreshadowing for our destination that morning:

The House of Terror. . .a place about as 'noir' as you could find.

Not some Hollywood special effects entertainment venue, the building at 60 Andrassy Avenue is both a Museum about one of the darkest times in Budapest's modern history and a memorial to its victims.


'A memorial of political terror, where people were detained, tortured and murdered during the Arrow Cross [far-right, Fascists] and Communist dictatorships. From the late 1930's the building was used as a meeting place by the Arrow Cross and later as their party headquarters, dubbed The House of Loyalty. It was taken over by the Communist secret police in 1945 and later served as headquarters for Hungary's Secret Service organization the State Protection Authority.'

Photography isn't allowed inside. Frankly, I am not sure who would want to take photos - you don't need them to remember the horrors depicted in displays and articulated by survivors in the many videos used throughout the memorial.

One of the most striking photo displays was not of victims, but of the perpetrators.  It took us a bit to realize that the display was of the perpetrators because frankly the men and women looked the same as those who had been victims.

Regulars here know I am not a fan of those blogs that list the 5, 10 or 12  "Must See" places for their readers. Nor do I like those who tell you what should be visited in a two- or three-day stay somewhere. I prefer to tell you about things we do in the places we visit in hopes you'll get the itch to set forth as well using your own ideas about what should be seen.  Here I am making an exception to my rule: if you are in Budapest, you should visit this tastefully curated but horrifying look at history.


Along the banks of the Danube near the fairytale castle-like building that serves as Parliament, another display created by sculptors, Gyula Pauer and Con Togay, has been drawing tourists since its 2005 installation.

"Shoes on the Danube" 60 pairs of rusted period shoes cast in iron sit at the water's edge. Behind them signs read, "To the memory of the victims shot into the Danube by Arrowcross militiamen in 1944-45."

We didn't make it to the shoes as we simply ran out of time - it will be high on our 'must see' list when we return (and we do plan to return to this amazing city)!


Several blocks away from the Parliament Building we did visit another memorial, this one built to honor the victims of the German occupation.  While the memorial is striking with its eagle (representing Nazi Germany) and Archangel Gabriel (representing victims), it was the personal messages, photos and stories that descendants of the victims have left, that grip your heart.  Each one a story of love and loss. 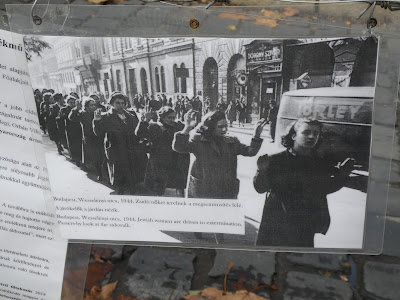 The caption on this photo reads:
'Budapest 1944. Jewish women being driven to extermination. Passers-by look at the sidewalk.'


I can't visit these memorials without wondering why the human race hasn't learned from history.  It was when I saw the notice in the photograph above that I thought perhaps it never will.

I use a hashtag, #whywetravel quite often on FB posts because so many ask if we still -- after this many decades of it -- enjoy traveling.  These 'noir' experiences in Budapest certainly qualify as examples of why we travel.  There is so much of the world and its history -- both good and bad -- to learn about and what better way to do it than visiting sites that might make us uncomfortable and be upsetting but that certainly present a story that needs to be told and heard?

How about you? Where has history taken you on your travels? Leave us a comment or shoot us an email.


Next week, I promise a bit more upbeat tale and hope that you will join us then for another adventure.  Thank you for the time you spent with us today. Safe travels to you and yours.

I am adding a post script to this because I need to know if any of you who have 'subscribed' - that is, signed up to receive this as an email in your inbox -- did receive it?  I seem to have been dropped from Feedburner, the distribution engine that brings my words to you.  If you did, could you be so kind as to drop a note and say, "got it"?

Through My Lens Our World Tuesday Wordless Wednesday
Posted by Jackie and Joel Smith at 7:14 AM