Meeting Those Who Enjoy Living Abroad

'Do you know her? 'I think you two have a lot in common. You would enjoy meeting each other.' wrote the editor of an on-line magazine for whom I am writing an article on our expat life in Greece.

She was referring to Seville-based travel writer Karen McCann, who with her husband, Rich, decided to have a year's adventure abroad and now 14 years later still reside in Spain.


I responded that indeed we do know each other; at least as people know each other in this blogosphere world in which we live, write and travel.  We might even know each other better than some of our IRL (in real life) family and friends know us.

In fact her 2012 book, Dancing in the Fountain, about their move to Seville was on my Pacific Northwest nightstand many years ago, along with Peter Mayle's A Year in Provence and Frances Mayes's Under the Tuscan Sun, tempting me with the idea of living somewhere in the Mediterranean 'someday'.  Back then the idea of living in Greece hadn't occurred to either of us.

For several years  Karen and I have followed each other's adventures. As we got to 'know' each other through blog comments, we vowed that one day we would meet somewhere on this side 'of the pond'. Her blog is aptly titled, Enjoy Living Abroad.

Karen and Rich have embarked on a Mediterranean Comfort Food Tour, using public transportation to travel around the Mediterranean rim with stops in North Macedonia, Bosnia, Slovenia, Italy and France before they return to Seville in mid-August.


Karen definition of comfort food is straight from the dictionary:
food prepared in a traditional style having a usually nostalgic or sentimental appeal.

'We are Coming to Greece' 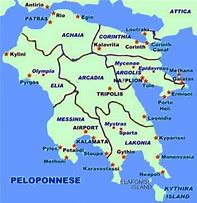 A few weeks before their departure she wrote saying they were starting the tour in Crete and would be taking the ferry to Gythio, the port town on the 'other side' of the point on which we live in the Greek Peloponnese. Would we be free to join them for dinner?

I responded that their food tour really should include a stop in The Mani, 'our side' of the point and home to the world-famous Kalamata olive.  I mean how could one write about Greek food and not have an up-close and personal encounter with this luscious Greek ambassador?

She agreed. Arrangements were made and we were off last week to pick them up in Gythio for what would be a three-day visit. As we drove to Gythio we discussed all the things we had in common and knew we would hit it off. (We just didn't realize how well we would hit it off!)

What concerned us though was how we would show them all the culinary wonders of our area in such a short time. The Mani, stretching from the shores of the Messinian Bay to the top of the Taygetos Mountains, has such a variety of culinary delights.

Eating our Way Through The Mani

LIMENI: We began eating about an hour after getting past the introductions. We wanted them to experience Limeni, a strikingly beautiful harbor about 40 minutes south of our home.  Two small enclaves of tourist accommodations hug the shore here. One called Limeni (for the 'harbor)) and one New Oitylo.  Oitylo, the original village sits high above the harbor on a bluff and is one of the oldest in the area. Homer wrote about it, to give you an idea of its age.

We chose a taverna at water's edge and ordered a 'small' mixed meat meze plate to share.  We were pacing ourselves, we agreed, after we'd outlined where we would like to take them during their stay.

KARDAMYLI: That evening we headed to Kardamyli, a village also dating back to Homer's time. (Agamemnon, king of Mycenae offered it to Achilles, for you history buffs). This ancient setting is home to some of the most modern Greek cuisine to be found. Tikla Restaurant and Wine Bar was our destination for 'nuevo Greek'. The newly-reopened restaurant  offered some new twists to old favorites: pumpkin risotto, pita wraps, and rooster with pasta were among the items we sampled.

TRAHILIO/TRACHILLA: By whatever name, the little village 'at the end of the road' was our destination the second evening together.  Akrogiali, the restaurant operated seasonally by Petro and his wife, had opened earlier last week for its summer run.  His tables, flanked by the sea on one side and the main road through town on the other, are usually packed in the summer.

The setting, the hospitality and the food always combine to knock it out of the ballpark when dining here. We take all visitors here for a taste of 'real Greece'.

KASTANIA: Our 'real Greece' theme continued on Saturday when we headed up into the mountains for a visit to this village named for chestnuts. I've written before about their October Chestnut Festival.  We toured a renovated Mani Tower and a restored church here working up a thirst, which we quenched at the local taverna. . .we were the only customers.

While we were there 'the fruit lady' from whom we buy our fruit and veggies showed up in the village square.  We'd missed her in the morning in Stoupa, so we simply went out and made our purchases and then returned to the taverna to finish our beverages.

Thanks for being with us this week ~ check out Karen and Rich's travels on her blog and we'll see you back here next week. Safe travels to you!

Linking this week with:
Through My Lens
Our World Tuesday
Wordless Wednesday
Posted by Jackie and Joel Smith at 8:20 AM