The Romance of Rome ~ Diamonds, Danger and Desire

The name alone of this vibrant, ancient city- up until a few weeks ago – has always brought to mind scenes of exploration and adventure tinged with romance, similar to those from  “Roman Holiday” the 1953 movie starring Audrey Hepburn and Gregory Peck.

For you who may not have seen the movie: a bored princess escapes her keepers, falls for a journalist and they zip around Rome on a Vespa, falling in love while having a delightful romp in Rome.
I didn’t think anything could top that, well. . ., until we did. . .in a manner of speaking, that is!

As I hinted at last week, this post incorporates two tales of Rome – both in which we are the lead characters – however one is real life and one is rather ‘novel’. Without further adieu let’s do Rome. . . with a bit of fact and a bit of fiction:

Two Tales of a City

When we left you last week we were boarding a train on a cloudy Sunday morning in Tuscany’s Camuche/Cortona station bound for Rome. We’d have about 24 hours there before catching our flight back to Athens. It had been a whirlwind week of satiating our taste buds and senses with all things Italian but it was time to return to our Stone House on the Hill in the Greek Peloponnese.

Jackie looked wistful. “Rome,” she whispered. “We are really going to Rome.”
Joel approached her slowly, sensing in Jackie’s far-away glance that she was lost in a vision of what was to come. . ."

We checked into what has become our favorite hotel in this city, The Mecenate Palace, a four-star place located three blocks from Roma Termini; a location that makes it a walkable distance to sites like the Spanish Steps and Trevi Fountain.  We’ve stayed here three times, each time requesting a room with a view of its neighbor, the Basilica of Santa Maria Maggiore – and we’ve never been disappointed.

This time, like our previous stays, we entered the room, dropped the suitcases and headed to the window to make sure the view was as remembered. Then we headed out to see how much ground we could cover in the few hours we had – unlike the fictional arrival:

Joel approached her from behind and landed a soft kiss on her neck.
“Oooooh, that feels so nice,” Jackie cooed.
(Joel was encouraged by that, let your imaginations soar. They didn’t go exploring outside the room right away.)

The same clouds that had intermittently dumped rain in Tuscany extended over the Eternal City, but that didn’t deter us, nor the thousands of other tourists and locals, from enjoying a Sunday afternoon stroll through Italy’s capital city.

“Hey lets make it a point to kiss at every monument we visit,” Joel suggested.
“Yeah, and then we can write a travel book, ‘Kiss Your Way Through Rome’.”
Joel quipped, “Then lets get going so we can research our next chapter.”

By the time we reached The Spanish Steps, the sky was getting lighter and the temperature climbing. The Scout and I did hold hands (so I wouldn’t get lost in the crowds) while searching for a place to sip cappuccinos, people-watch and rest our feet.

From the size of the crowds at the steps, we decided to skip the other ‘tourist sites’ and enjoyed a stroll past everyday scenes back to the hotel. A sunset drink sipped in the rooftop bar at the hotel, followed by dinner in its adjacent restaurant completed our brief stopover.

Rome really is a city that enchants. You can understand why tales of  romance are often set here. Speaking of romance novels, let me tell you the story about the one in which we are featured:

The Tale of The Tale

Back in January, a blogger-buddy, Irene Levine (More Time to Travel) wrote about a couple, J.S. Fletcher and Kathy Newbern, travelers and writers, who some 25 years ago put their travel knowledge and skills together in a money-making venture. They started writing custom romance novels – a ‘labor of love’ you might say. They created  YourNovel.com

As part of that article, they offered a free book to a person who'd be randomly selected from those who'd left comments. You guessed it. I won!

I went through their list of book titles and picked a location and storyline, a thriller (Joel was cast as a cross between Indiana Jones and Superman in a secret agent role and Jackie was his clueless sidekick).  Then I chose the degree of romance, picking ‘huggy-kissy’ mild over ‘sexy-steamy wild.

Then filling out a questionnaire, I gave them the information necessary to personalize the novel, things names, nicknames, eye and hair color, cars, work, favorite music, and favorite scents. 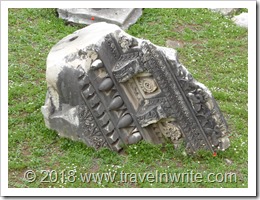 I looked back at my comment on Irene’s post and see that I wrote, ‘laugh out loud’, giggling and smiling’ at the thought of us in such a book.

As I read the book, I moved on to guffawing and howling with laughter.

Example:  the book has us flying a wide-bodied jet, overnight to arrive in Rome from Athens, which in real life is a two hour flight on smaller aircraft. Had we flown from Seattle as in our old life the plot would have worked as there would have been time for the frolic under the blankets that the two characters had while en route. It did make for good laughs.

And on that note, I’ll say arrivederci Italy – real and imagined. We are back in Greece and I’ll have  a report for you from The Stone House on the Hill. Until then, safe travels to you and yours!  As always the time you spend with us, commenting and sharing is so very much appreciated.

Linking this week with:
Through My Lens
Our World Tuesday
Wordless Wednesday
Communal Global
Travel Photo Thursday –
Best of Weekend