To travel by train is to see nature, human beings, towns. . .and rivers, in fact to see life.
-- Agatha Christie

We love European train travel. Nothing can get our travel juices flowing like a train station over here. And our week-long getaway to Italy’s Tuscany last week gave us more than ample opportunity to pursue our passion for ‘riding the rails’.

We’ve spent most of our lives in the train-starved Washington State where a single train departs for  Canada’s Vancouver, British Columbia or south to Eugene, Oregon, (sometimes as far as California) or east towards Montana and Chicago. These are all one or two departures a day from Seattle.

Then we moved to Greece – there are no trains running here, aside from a small metro commuter in the Athens area. (There is talk of a high speed train between Thessoloniki and Athens one day. . .)

So for this pair of vagabonds, being in a train station bordered by multiple tracks with a reader board listing dozens of destinations, we simply felt like  kids in a candy store.

On the Leonardo Express to Rome

We flew from Athens to Rome. Once there we did as so many travelers do: hopped aboard the Leonardo Express, for the 32-minute ride between the airport and Roma Termini, the downtown Rome train station. 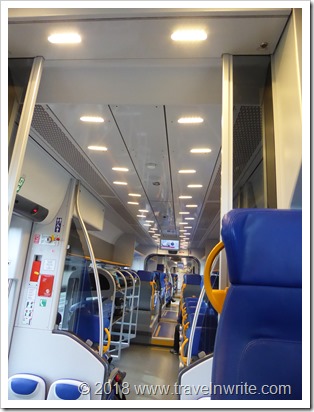 The cost* was 11 euros per person each direction
(* if booked in advance on-line). It is a quick and easy means of travel into town.

There’s also some great sightseeing as it travels through agricultural land that surrounds the city and then you pass some great historic sites once you enter the city.

Plenty of seats and luggage racks make it a great choice for getting to the airport and there’s usually a train departing every 20 minutes, at most every half hour.

And according to its website, should there be a strike that stops trains from running (we’ve had that happen to us twice during previous visits to Rome) they claim they will provide alternate transport to the airport. 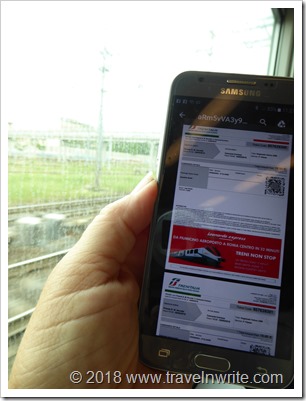 We bought our tickets for the train bound for Florence at the same time we’d purchased the Leonardo Express tickets - after we arrived at Rome's airport. We paid dearly for having ‘walked up’ so from that point on, we purchased tickets in advance using the internet.

No printer, no problem. They’ve gone electronic.
(It was the first time we’d done electronic tickets and I was a wreck turning the phone off and on to make sure the ticket would show up when the conductor came past – but it worked, I am hooked!)

We had no metal detectors, no stripping of coats and shoes, no pulling computers out of the bag. We simply walked from the track on which we arrived, to the track where our train bound for Florence was sitting.

We were reminded that the reader board displaying train departures lists the train’s final destination, in our case, Milan, and a running list in smaller print tells where stops are made along the way.

I never travel without my diary.
One should always have something sensational to read on the train.”
--Oscar Wilde

Old Oscar must have taken a night train to have written such a thing. One of the wonderments of train travel to our way of thinking is the world passing by the windows. I can’t imagine reading anything with a bit of daylight to illuminate the country through which we traveled. We’d have missed scenes like this. . .

And those far distant towns. . .we wonder what the names might be as we’ve come without our usual travel companions, a map and a guide book. This was a rather spur-of-the-moment trip for us.

With scenes like these to keep us entertained. The hour and a half trip went rapidly. Well, so did the train, come to think about it!

As the sun set, we pulled into Florence. . .home of Michelangelo’s David, shops, galleries, eateries. . .oh my! Coming from our small village in the Greek Peloponnese, it was a shock to the system! I’ll tell you more about that stop in our next post.

However, I have just a bit of housekeeping to do today because the European Union and Facebook are complicating the world of blogging through two separate acts. . .

First, Facebook. Many of you read the blog after I would post it on FB.  I am learning that FB isn’t always feeding those posts to everyone so if you want to be assured of getting posts, you may need to 'subscribe' (its free – but it is a two step process that involves signing up with the link provided in the right hand column on our home page, http://www.travelnwrite.com and then when Feedburner sends you an email asking if you signed up, you must say yes or verify you did).  I have a number of you who are still unverified on my subscriber list. If you do get it on FB, please hit the like button so it will continue feeding through (assuming you want it to!)

Then comes the EU. On May 25, the General Data Protection Act comes into force across the EU (General Regulation 2016/679 of the European Parliament). This means that companies (and bloggers apparently) will no longer be able to use personal data, (Now keep in mind, I don’t have any personal data for you other than your email address – and I don’t even have that, it is Feedburner that sends the emails). But apparently we must have your consent to send such messages. Now I am not going to contact you individually as I don't know who you are.

So tell you what. If you don’t want to receive the messages, all you have to do is unsubscribe.

There, I’ve satisfied giving you notice – I hope! (And I hope you don't unsubscribe!!)

Bottom Line:  I am going to be writing a post at least once a week to tell you about navigating the world of the ex pat in Greece and our explorations on this side ‘of the pond’. We are grateful for your comments, shares, and emails and the time you spend with us. . .and look forward to having you with us!

Until next week, safe travels to you and yours and hope you’ll be back for a taste of Florence next week!

Linking up this week with:

Posted by Jackie and Joel Smith at 7:44 AM