Even moving to Greece wasn’t going to change our annual winter migration to our timeshare life on O’ahu, Hawaii. While increasing our commute sizably, it remains an annual journey that is worth the time and effort it now requires.

Somehow, in the blink of an eye, ten years have passed since we took the plunge into timeshare life. And it happened right there at the Marriott Vacation Club in the Ko Olina planned development on this island’s west coast.

We’d been among those whose mantra was, “Not us! We aren’t timeshare people!” We’d simply taken the sales pitch offer for a good deal on a few nights stay and to prove to ourselves that we’d never buy a place there. Famous last words.
It has become our ‘home resort’ – a place where we are guaranteed three weeks of Aloha Life each year.

And ‘home’ has taken on a new meaning since that initial timeshare purchase.

Now that we are technically homeless in America, this interval ownership provided as much a U.S. home base as we have these days. I have to admit we looked forward to ‘the familiar’ it promised: shopping at our ‘local’ grocery stores, eating at our favorite restaurants and spending time with our same-time-next-year friends who return to this tropical  ‘neighborhood’ at roughly the same time each year..

As nice as that bit of familiar was, our goal this year was to do the island differently. We seldom venture into the big city of Honolulu; gateway to the iconic Diamond Head (which really is quite magical) and Waikiki (which really is over-run with tourists and we avoid it like the plague).

We were doing a treasure hunt of our own design – a search for the island’s Hidden Gems . . .those special lesser-known places and those often frequented by locals but overlooked by visitors such as ourselves.

I’d promised the Seattle Times travel editor that I could find them and he was expecting an article and photos from me in February featuring them.  The challenge was on:

Research began in December while we were still in Greece.  I contacted friends who’ve lived on the island and asked for their recommendations. I began reading up on the places they suggested. Then, as we traveled about the island and met locals, I told them of my quest and they also had more suggestions of ‘not to miss’ places. 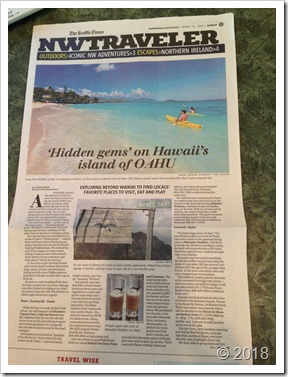 Since I know many of you didn’t see my article I decided that I’d share a few of our finds in today’s blog post.

I can tell you this was one of our best trips to Hawaii – made so by these special places. I know we plan to return to them in future visits..

I don’t have space to write about them all, but among those places we ‘discovered’ were a naval air museum, a centuries hold Hawaiian temple, an eatery and a rum factory.


Signage is limited and they keep the security fences locked so you don’t just drop by the Museum at Kalealoa Airport, formerly the Naval Air Station, on Barbers Point, near Kapeolei on O’ahu’s west coast. You have to schedule your tour in advance.

We chose a weekday morning and ended up having a private tour led by Brad Sekigawa, historian and Brad Hayes, executive director.

It was an amazing, simply, amazing two hours.

We were able to get up close and personal with airplanes and helicopters, going into some, standing under others, touching, photographing and asking questions. Trucks, tanks and fire trucks as well as helmets and flight gear are on display. Vehicles, aircraft and equipment that saw war duty. Some have been used in movies.

In leiu of an entrance fee donations are: $15 for adults, $10 seniors/military, $8 under 18.. To avoid the intense mid-day sun on the tarmac, booking early morning or late afternoon tours are recommended.

Frankly we were both skeptical as we set out for the Hawaiian temple. 'Ancient', several articles called it. Not ancient compared to Greece, we thought. But, oh my! What it may have lacked in centuries, it made up for in magic. The view of Waimea Bay and the channel between O’ahu and Kaua’i from high atop the hill where the temple was located was breathtaking.

And on the day we visited, we had the island’s largest heiau, ancient Hawaiian temple, to ourselves.

The old temple, several centuries old as a matter of fact, is believed to have been dedicated as a luakini, or sacrificial temple, where ceremonies involving animal or human sacrifices were conducted.

A slight tropical breeze -  maybe the the breath of long-lost rulers - caused goose pimples as we stood on this sacred site.  Entry is free; limited on-site parking.


So tucked away amidst the sugar cane fields was this small distillery that we drove past it on our first try. Ready to give up, we backtracked our route and were certainly glad we’d persevered. This farm-to-bottle rum distillery is making a name for itself with its production of Ko Hana Hawaiian agricole rum; made from sugar cane, not molasses.

The distillery is surrounded by cane fields that are still hand-harvested. It is housed in what was once the Del Monte (cannery) company store. Several tours are offered daily; adults, 21 and older ($25 per person) and children ($15 for ages 6 – 20, under 6 free). At the tour’s end adults taste rum and youngsters are served gelato.

The distillery’s display garden near the tasting room entry showcases the varieties of heritage cane plants – it was amazing to walk among the varieties of cane that go into the making of this rum.

By far the biggest surprise we had was the meal we ate on our last evening on the island at the cafe in this retreat center.

It serves as an on-the-job training program and revenue generator for Alternative Structures International, the non-profit organization that operates the retreat center and provides social services for the disadvantaged.

‘Kahumana’ is interpreted as, “Guardian of the Life Forces”, derived from the Hawaiian words ‘kahu’ a spiritual leader, healer, or priest and ‘mana’ life force.

Our entrées, each less than $20, included Macadamia Nut Pesto topped pasta and veggies crowned with grilled Mahi Mahi and a Coconut Dahl lentil chicken curry with rice and fresh vegetables. The Lilikoi (passion fruit) Cheesecake was so good, I forgot to take a photo!

Alcohol is not served but BYOB for adults is fine. Dining reservations recommended.

This one was a perfect dining spot for those staying out on the west coast.  It would be a rather long drive for dinner from Honolulu but they do serve lunch as well.

Kite surfing beaches, cliff top hikes, coffee and chocolate factories were among the other gems we found.  I’ve already gone far beyond the recommended number of words for blog posts, so will add a link to my article that appeared in The Times for those who’d like to read more.  Thanks, as always, for the time you’ve spent with us on this treasure hunt on O’ahu. The Times travel article.

It is Holy Week, the week before Easter in Greece. Next week, I’ll tell you about how we celebrated it in this village.  Until then, safe travels to you and yours ~

Linking this week with some or all these fine bloggers: