The Road to Greek Residency ~ Timing is Everything

As all travelers know, timing is everything.  A missed connection, a traffic jam, a detour, any number of things can impact the timing. And timing can make or break a trip.

One thing we’ve learned in our years of travel is that sometimes – even with the best laid plans and preparation – timing is beyond our control. Such is the case of our Road Trip to Greek residency. . .

For those just joining us: We are part-time U.S. expats from the Seattle, Washington area who own a home in the Greek Peloponnese. Two years ago when we entered this lifestyle it seemed our tourist visa stays (90 days in and 90 days out per the Schengen Treaty) would be just right. But the rigidity of those limits have us wanting a bit more flexibility to travel, or stay longer, or return more frequently and the way to do that is to have a resident visa. 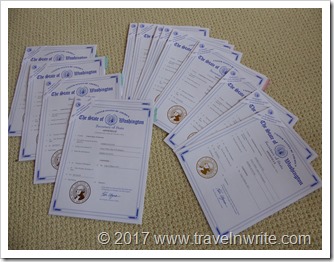 We set off on our Road Trip to Residency in February  – with bulging application packets of documents proving health, wealth and honorable citizenship. We traveled to San Francisco for an interview and review of those documents by the Greek Consul there who serves the U.S. area in which we live.

Our documents needed to be current, so there was a tight timeline between the California trip and our return to Greece. Timing is everything.

Having obtained a 12-month entry visa as a result of that San Francisco meeting – we then made a quick trip to our state capital Olympia, Washington. There we had those stacks of documents notarized and later apostilled by the Secretary of State’s office so that the Greek government could accept them. Tight squeeze in scheduling, but timing is everything.


On the Road in Greece:

Our mid-March return to Greece where we plan to be until early June – seemed back then more than enough time to make it through the Residency permit process. So optimistic were we about being approved and the process going smoothly that we decided we’d buy a car this spring as well. (A resident permit is required of foreigners registering cars here).

However, the first month came and went as our packets of documents were translated into Greek and the new documents stamped and added to that pile of paperwork we’d brought with us.

Last week was – finally -  ‘the’ week. With our Greek attorney in the lead we took those documents to the Greek immigration office in Kalamata. It was a sparsely furnished, stark, sort of place. Only a handful of other hopefuls were ahead of us, and we waited our turn to talk to one of three clerks behind a glassed-in counter.

The clerk smiled at us and welcomed us in English – a good start, I thought. But then in Greek he told our attorney why we wouldn’t be getting any permits that day nor would we be leaving our documents for review:


We would need to pay another fee to the bank, have photos taken and put on a CD, and we would have to have fingerprints taken by immigration officials. The conversation at the counter went:

“Can we do that today?”  The Scout asked, trying to salvage a bit of the ground we seemed to be losing.
“That is a problem,” explained our attorney. “The equipment is here but the law is so new it isn’t hooked up”
“When will it be hooked up?’ asked The Scout.
“Maybe next week,” she replied. “But they also need a technician to operate it. . .”

The directions for the photos advised no smiling. We had them taken after leaving the immigration office – it wasn't difficult to not smile.


On Road Trips - Pay attention to the Road Signs 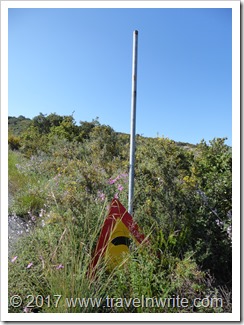 In early March we’d read a Greek news article about an overhaul of the country’s immigration system for foreign residents.  It sounded really slick as it changed from a sticker pasted into the passport, to a plastic card - a residence card, with computer chip, that doubles as an identity card.

The change was initiated back in 2002 – 15 years ago! – when all European member states agreed to introduce the new cards The aim is to have a uniform residence permit for the European Union. The regulation was updated in 2008. Some countries have completed the process, for instance, Germany rolled them out in the fall of 2011.

Basically it uses electronic photo identification and fingerprints and other data on a chip in the card and sounds much like the U.S. Global Entry card used many thousands of travelers there.

So that explained the need to go get photos taken, pay an additional fee, and await the fingerprint machine and technician. We seemed to have timed our effort to put us right in the middle of the conversion. . .and that is where I intended to end today’s post.


Stop! Listen to other travelers

Monday morning we had a conversation with a fellow American who lives down the road from us. He’d also been in the pursuit of a residency permit and obtained it back in mid-March. We congratulated him on his timing, having avoided the new system.

'No,' he said. 'I had my photos on a CD and they fingerprinted me in the Kalamata office. And issued a residency card - not a sticker in the passport.'

(Now it had taken him a half dozen visits to the Immigration office to get it done, but obviously he timed that March visit correctly.)

So as I wrote in the beginning, timing is everything when you travel -  even on Road Trips to Greek Residency.

Thanks for being with us again this week. Next week, I’ve got a Greek ferry tale for you. Should we resume the road trip, you’ll be the first to know! As always, happy travels to you and yours!

Linking this week with:
Through My Lens
Our World Tuesday
Wordless Wednesday
Travel Photo Thursday –
Photo Friday
Weekend Travel Inspiration
Posted by Jackie and Joel Smith at 7:44 AM