Just so you don't think we've taken leave of our vagabond senses here in Greece with all the home and gardening projects at our Stone House on the Hill, I'm putting those tales aside this week -  and telling you about our travels.


As I've said in earlier posts, one of the reasons we wanted a home base on this side of the Atlantic Ocean was to give us a jumping off point to European destinations; trips that didn't start with a nine or ten-hour trip from the Pacific Northwest just to reach Europe. 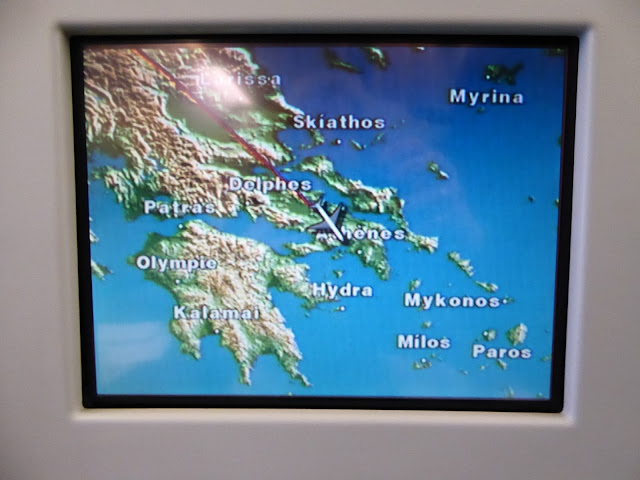 I took the photo of the map while our flight to Cairo three weeks ago was passing over Greece. It shows the 'hand-shaped' Peloponnese.  Our home is just south of Kalamata (on the left side of the middle 'finger' and Kalamai on the map) - putting us in an excellent spot for explorations anywhere in the region.

From here we can take no-muss, no-fuss Greek road trips throughout the Peloponnese and all of Greece for that matter. Pronounced pe-lo-po-nih-sos, this chunk of land lies to the southwest of Athens and was a part of the mainland until the Corinth Canal was opened to ship traffic - now a short bridge connects the two massive land parcels.

Our Greek road trips are a lot more spontaneous, inexpensive and simple when we aren't hauling a carload of suitcases packed in the U.S. Pacific Northwest for a month-long stay (and it doesn't take many to fill the tiny cars here).

Our rental car is bright red, so we've named her "Poppy" - she matches the poppies that are currently in bloom all over the countryside. And with road trip temptations calling out from every direction: mountains, gorges, villages and cities, the most difficult part of a road trip is choosing which directions to take off on in Poppy.

Last week we hit a lull in projects and while we await stonemasons, plumbers and other professionals, we decided to set out and explore.  An overnight bag stashed in the backend we headed up the hill on which our home is located to connect with the main road four kilometers away. We hadn't gone but two kilometers when we slowed for the first of many animals we were to encounter. These are the kinds of traffic slow-downs we enjoy.

Our destination was the eastern coast of the 'finger' to our right. It takes only 45 minutes to cross 'our' middle finger and from there we headed northeast along the coast.  Just outside Gythio town, on Glyfada beach there sits a wrecked boat, the Dimitrios. While the real story may never be known its tales come in two versions: first, it was carrying drugs to Europe when it was impounded and then abandoned and the other version was it hit poor weather and the crew abandoned the ship. Take your pick. Or make up a new one - it probably will work. 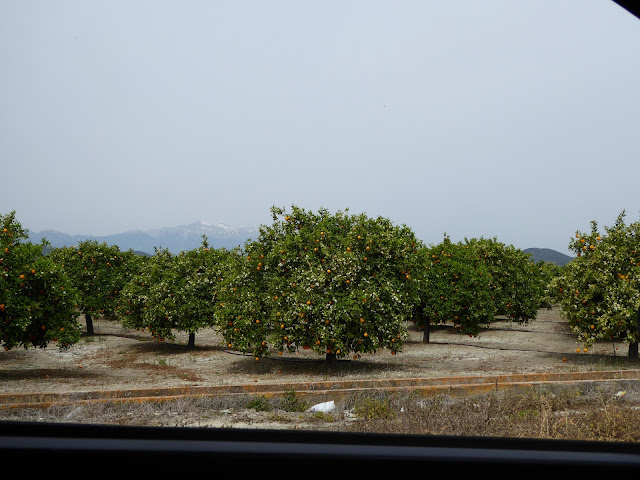 From there we left the coast line and headed inland through groves so laden with oranges and blossoms that we rolled down the car windows for the aromatherapy treatment - the air was heavy with the scent of blossoms. 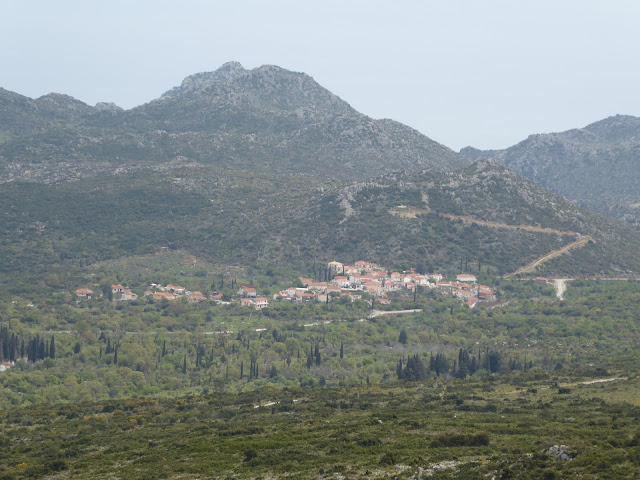 Just as our 'middle finger' has the Taygetos Mountain range for its backbone, this finger, the Laconia prefecture, has the Parnonas Mountain range running its length. Our destination was the other side of that range, where we'd be in the shadow of Mt. Pardon, 1,839 meters, 6,033 ft. As the road began ascending the range in a ribbon of switchback turns, we couldn't help but wonder who had braved the sheer drops and craggy cliffs to build it. 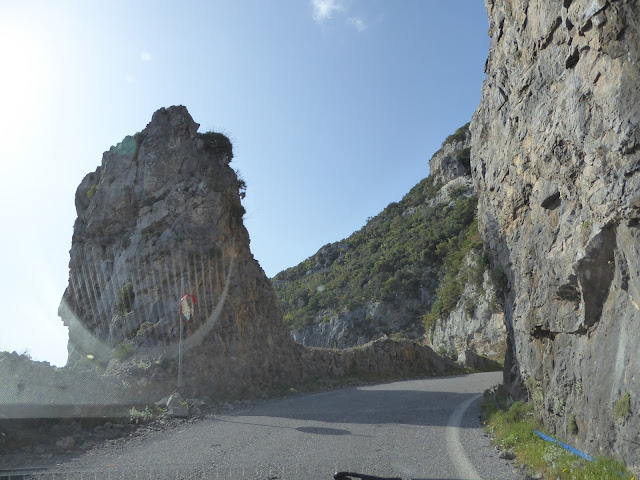 Traffic was light  - we met very few cars - which is good as the road continued to narrow and climb the cliff face.  Every once in awhile the narrow ribbon led us to and through small villages tucked away in the hillsides. Sometimes, like in the photo below, it wasn't animals, but delivery trucks that caused us to pause. We couldn't get past on the tiny roadway. (When he finished, he backed up for us to pass.) 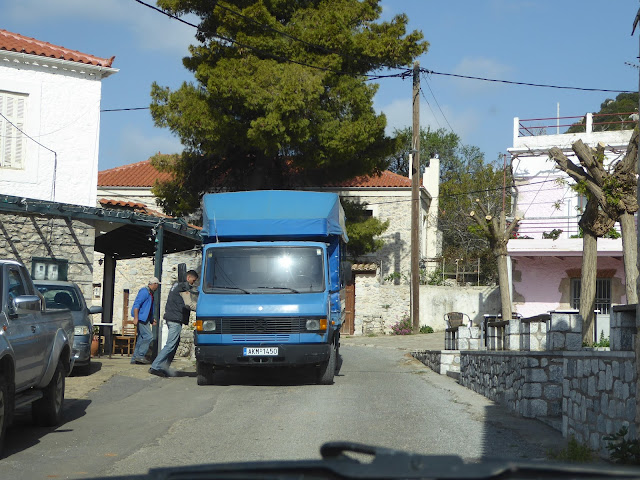 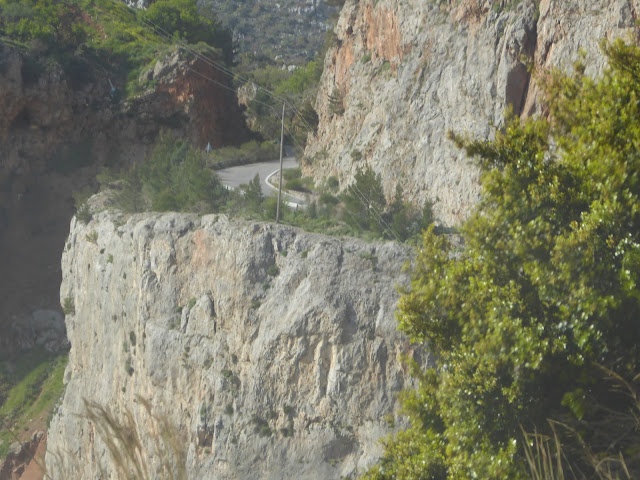 The heights made for some spectacular views as we climbed higher and higher, then began our descent. . . 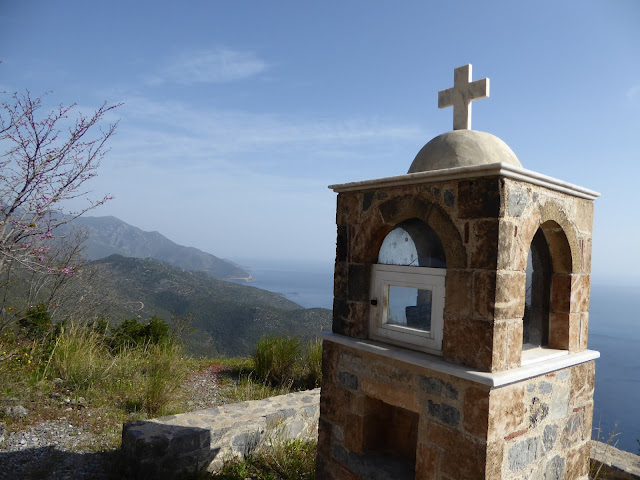 . . .on a hair-raising 10 kilometer stretch of road leading us to a place where George Bush and Princess Diana have been, but likely not many mainstream tourists to Greece. Where were we heading? Well, that is the tale I will tell you in our next post.

Hope to see you back with us again and until then safe and happy travels to you and yours~
Welcome to our new subscribers and followers - hope you'll come back often.

This week we are linking with:

Posted by Jackie and Joel Smith at 5:30 AM