Exploring Jordan’s Wadi Rum: What are we doing?!

The afternoon sun was intense by the time we arrived and the wind had stirred up the desert dust. Jordan’s Wadi Rum looked as vast and unforgiving as it did in the epic movie, Lawrence of Arabia.

We’d spent the morning at Petra, the ancient rose-red city carved out of sandstone cliffs centuries ago. We were on a day-long outing -- booked long before boarding our Oceania’s Nautica cruise ship in Bangkok bound for Istanbul.  We’d opted out of the cruise ship’s tours offered in the Kingdom of Jordan. Instead, the two of us set off with a tour company’s driver who turned us over to local tour guides at Petra and  at Wadi Rum, with whom they contract for services.

Stretching for more than 278 miles (720 kilometers),Wadi (Arabic for ‘valley or river channel’) Rum is also known as The Valley of the Moon.  Our tour was through just a small portion of this expansive landscape, yet, that which we experienced seemed a vast, isolated world. 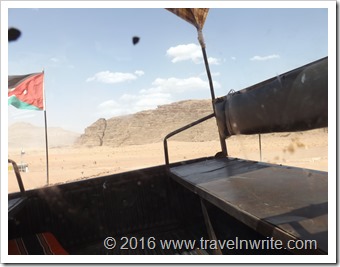 We left the main highway and were following a narrow road to nowhere it seemed, when in the distance we saw a beat-up old pickup along side the road. Our driver pulled up behind it and its driver, a Bedouin man with a red checked ‘shemagh’ (scarf) covering his head, came back to our car to get us. He was our next tour guide.

With sand swirling out over the landscape we opted to ride in the cab with him, instead of in the back bed of the truck with its rather firm seats. His command of English was a bit limited, but far better than our ability to speak his language.

With our original tour-company driver assuring us he’d meet us in a couple hours for our trip back to the ship, we were off!  In an old pickup. With a Bedouin driver. In the Wadi Rum. In Jordan. In the Middle East. . .

. . .and when the pickup left the pavement and began bouncing over the desert sand, I have to admit that for several moments, my brain was bouncing as well.

It was silently screaming, “What are we doing?!?!”

I had obviously let  my imagination get away from me – I’d listened to too many ‘well-meaning-but-overly-cautious-ones-back-home’.

What were we doing?


In reality, the time spent in that pickup traveling where roads didn’t go, may have been the highlight of the outings we had during our month-long cruise through the Middle East.

The Wadi Rum was designated a ‘protected area’ in 1998 and in recent years it has become a popular destination for eco-tourism.  Hiking, camel treks, rock climbing and camping bring thousands of tourists here each year. And that thriving tourism business is providing a new source of income for the Bedouin communities of the Wadi Rum.

Still, with increasing tourism, we saw just one other tour 'truck' similar to ours in the distance and one other  Bedouin with his camels, hoping to convince some visitor to take a ride on his giant beasts.


Our guide knew his route – we’d have been hopelessly lost and turned around without him – and after slipping and sliding over the sand (which reminded us of driving in snow) he topped to point out some of the area’s ancient rock drawings carved into the sides of the sandstone and granite mountains that make up the Wadi Rum.

Then on we bumped and slid through the sand, no markers or signs in sight but our driver with some innate GPS system it seemed knew which way to turn and when.

Amazing stretches of desert. And some of the astounding moments we experienced still bring goose pimples and smiles when we look at these photos. . .

Time went far too fast and we ended our tour with a stop at The Seven Pillars of Wisdom landmark named for the book – by the same title – written by Thomas Edward Lawrence, better known as Lawrence of Arabia.  Much of the award-winning 1962 movie, ‘Lawrence of Arabia’, was shot in this Wadi Rum.

Our time at both Petra and Wadi Rum was too short.  We wouldn’t combine the two places into a single day’s outing again.  Both are deserving of far more exploration. Should we return, we’ll do it in the early morning before that unrelenting Middle Eastern sun reaches its full intensity.

Any number of tours are available in the Wadi Rum and a good source of information is found at www.wadirum.jo    Should we get back there, I want to camp out over night.  Next week I’ll tell you where I plan to camp!

Just for the record: I did leave information in our ship’s cabin that provided the name of the tour company, phone numbers, our destinations and estimated time of returning to the ship – just in case something had happened to us (intended or accidental) or that might have caused a delay in our return.

Safe travels to you all and thanks to those subscribers who’ve alerted me to problems with Feedburner’s distribution of blog posts.  If you’ve subscribed but are not receiving posts regularly on a weekly basis in your inbox, please let us know in the comments below or send us an email to travelnwrite@msn.com.  Many thanks!

Linking this week with:
Mosaic Monday –
Through My Lens
Our World Tuesday
Wordless Wednesday
Travel Photo Thursday –
Photo Friday
Weekend Travel Inspiration
Posted by Jackie and Joel Smith at 8:28 AM