Greece ~ A Time of Harvest, not Halloween

The olive harvest season officially got its start in this part of the Greek Peloponnese on Oct. 26th, St. Dimitrios name day. At The Stone House on the Hill, harvest took place a few days later on the day commonly known as Halloween back in the States. (I am happy to report the U.S. hasn’t yet exported that holiday to this region; there wasn’t a ghost, goblin, costume or party anywhere to be seen). 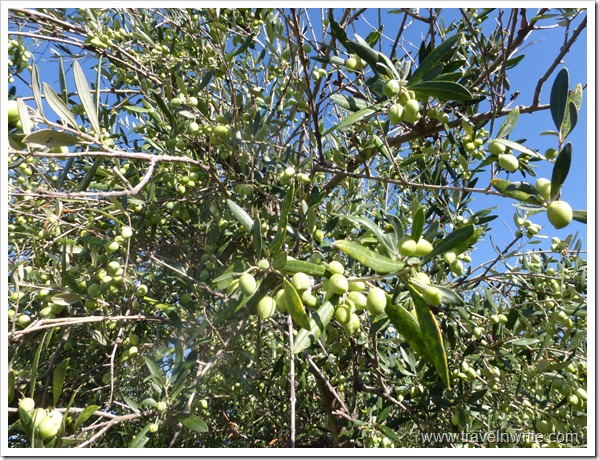 Here, the olive and its harvest take top billing this time of year. 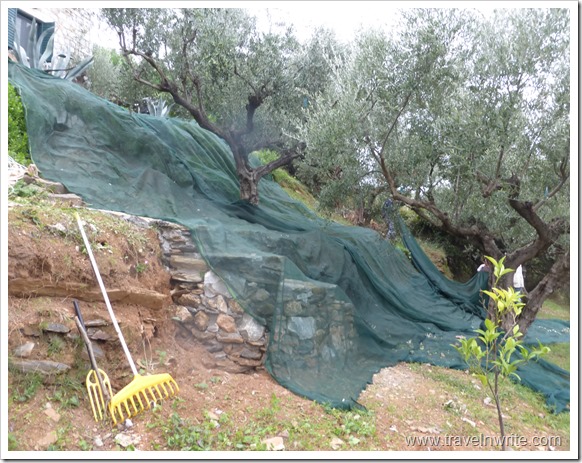 I’d been envisioning this harvest since last December when we purchased The Stone House on the Hill with its olive terraces that slope down the hillside on which the house sits.  There are 15 olive trees on the property some estimated to be a 100 years old, plus one we planted after taking ownership.

My daydreams about the event (thanks to Frances Mayes and Peter Mayle whose tales of  Tuscany and Provence inspire such adventures) had us harvesting under blue skies, surrounded by friends, drinking and eating and making it an event worthy of a book about our lives here in Greece.   Reality quickly set in: 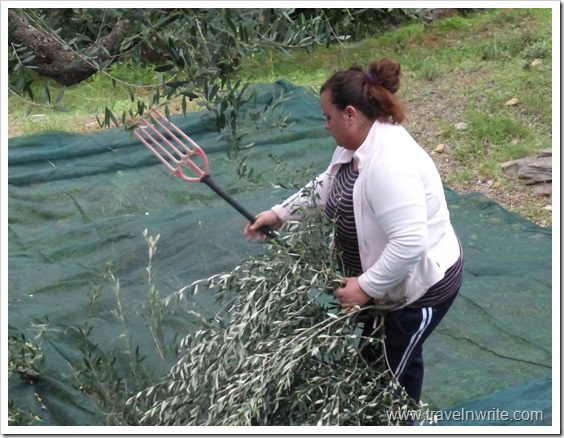 The wind didn’t just blow the weekend of our harvest, it howled. We had to interrupt harvest for an hour to allow a rain squall to drench the trees and ground. No singing like Zorba. No eating like Frances. No drinking like Peter.  It was work. Hard work. (But you know? It was also fun!) 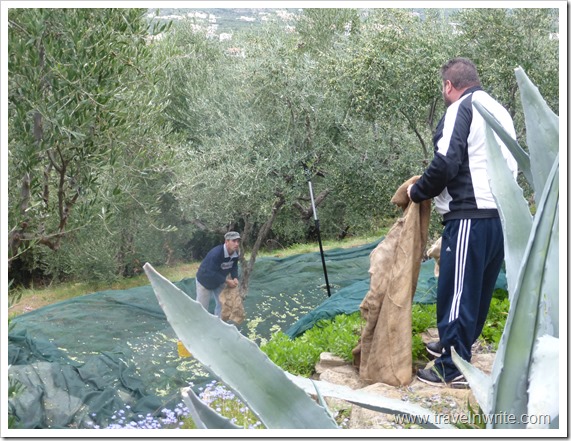 We’d had the good sense to hire our gardener and his wife to assist us since we didn’t have the slightest idea of how to harvest olives. Ares and Donika came with equipment loaned to us by our friend Yiannis who runs the family restaurant at the foot of our hill and who also owns 1,000 olive trees. 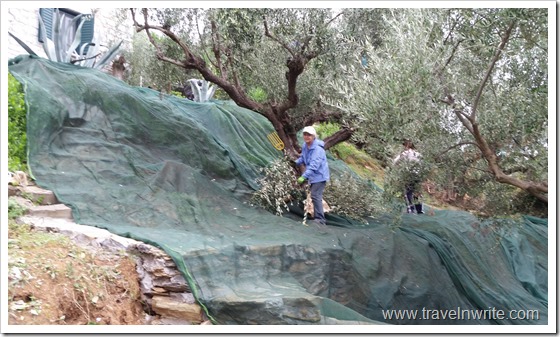 We had some of the easier tasks: Joel hauled the cut branches -- from which we had beaten off the olives -- to the burn pile. While Ares ran the automated olive-shaker-offer and cut branches, I helped beat those fallen branches so that the olives were released onto the enormous nets spread below the trees to catch them.  Donika and I would then get on our hands and knees to sort the smaller branches from the olives. We’d all roll the nets and put the olives in the burlap bags. 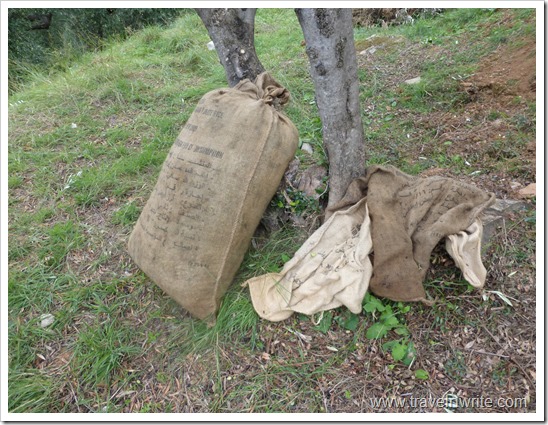 The grove, like the house, had been neglected for the past few years – trees hadn’t been trimmed, olives not harvested and weeds grew as tall as the grove’s terrace walls. So even the TLC we bestowed in recent months, we didn’t have a bumper crop but that didn’t detract from the fact it was ‘our’ olive crop and we were in Greece harvesting it! 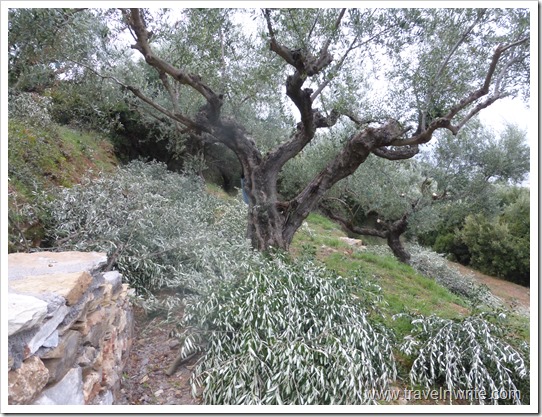 It took a full morning to harvest our small crop. We were ready to quit but to begin preparations for next year’s crop Ares returned in the afternoon for the first round of trimming the trees. They’ll get another cut in February. 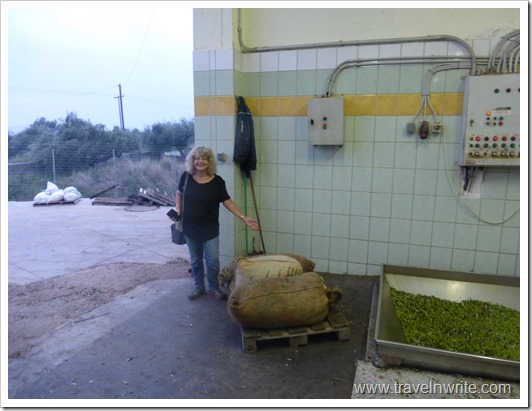 That afternoon at 5 p.m. we watched our olives become oil. Let me tell you that in life’s magic moments, this ranks right at the top of the scale! That’s our crop I am standing next to, we were the next order up: 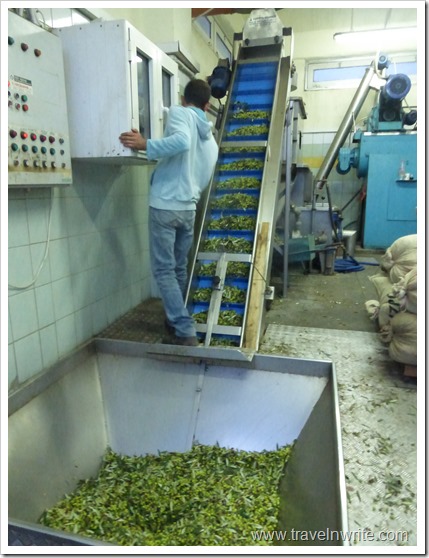 And then there they went! Within minutes our first harvest had come to an end. . .or so we thought. 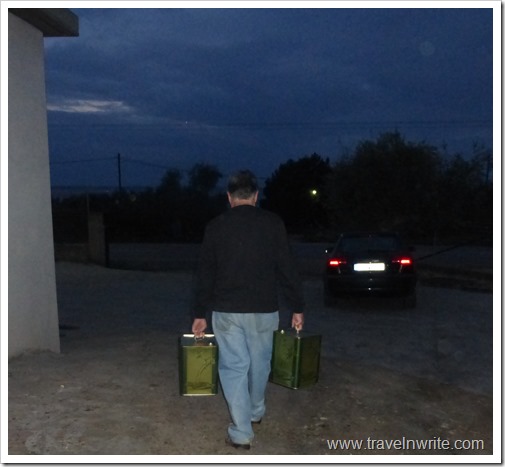 I posted a real time report on FB Saturday evening while we were at Yianni’s restaurant for dinner. But a few hours later we got a call saying they’d sent us off with the wrong oil (mysteries of oil production) so the next morning we returned those two cans and left with our olive oil:  4.5 gallons of oil (shown in the photos below). 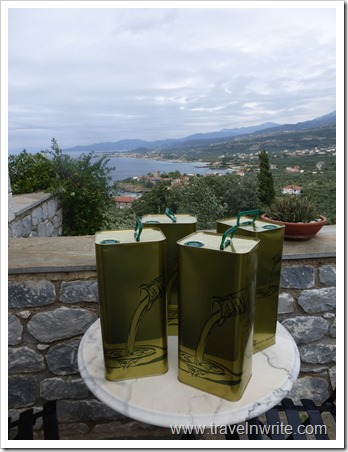 A number of you asked after seeing the FB post about what one does with that much oil.  There are options of selling it to the processor or leasing out the grove to others who will manage it, harvest and then provide you a portion of the oil. We didn’t produce enough this year to worry about it. 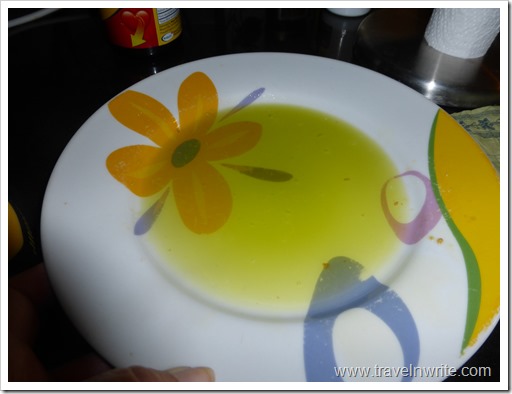 The proof is in the pudding they say. . .and let me tell you, this oil is nectar of the gods! Wish all of you could sit around our table breaking fresh loaves of bread, cutting chunks of feta cheese and smothering both in big servings of olive oil.

Hope you’ll return for more tales from our adventures in Greece.  We appreciate the time you spend with us and look forward to your comments!  Safe travels to you and yours~