Gulf of Aden: Somalia to our Left ~ Yemen to our Right

With hummingbird speed and size, they skim the surface of the sapphire sea in which we are now cruising.

Flying fish, they are called.

Sometimes in small schools and other times alone, these tiny entertainers are providing a continuous show as we enter the Gulf of Aden -- yes, that, Gulf of Aden, the one making headlines in recent days. 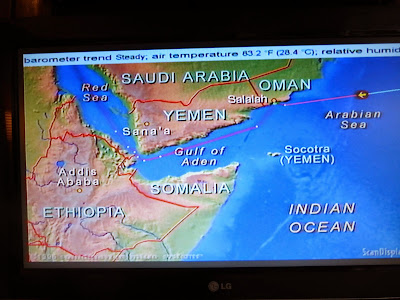 It is the Gulf where pirates have gained notoriety and where war ships recently gathered. Somalia on the Horn of Africa is to our left and Yemen on the southeastern coast of the Arabian Peninsula is to our right.

We've not seen land on either side - yet. Today though,with increasing regularity, we are passing more and more freighters traveling on this shipping route to and from the Red Sea and Suez Canal. Aside from the freighters, we've watched flying fish on this our first of four sea days it will take to reach our next port of call, Safaga, Egypt - our gateway to Luxor. 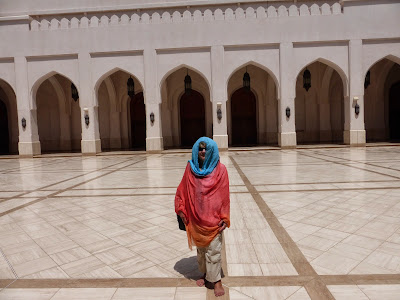 We were officially introduced to the Middle East with Monday's stop in Salalah, Oman. The exotic sights, sounds and smells didn't disappoint. While we'd left the humid Far East we hadn't left the heat. The sun was relentless as we walked the city's streets - some shops providing an air-conditioned reprieve and others being small ovens with no cooling systems.

Although brain-numbing hot, the dress for both men and women is conservative in this Arabian country. I posted this photo of myself on Facebook following our visit in Oman as an example of the conservative dress required to enter a mosque: womens' ankles, wrists and head must be covered and men must also have long pants and conservative shirts. Feet must be bare (yes, those tiles were hot). The rules are much the same for the Buddhist wats we visited in Thailand and the Hindu temples we entered in India.

The cultural differences, the astounding history we are discovering, the religions we are being introduced to are simply overwhelming. We find ourselves in need of 'de-compression' time back on the boat - to process all the incredible experiences we are having. 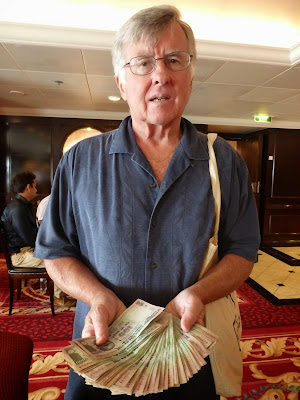 I had The Scout pose with our wad of  Indian Rupees before setting off to explore Mumbai on our own last Friday. We'd exchanged $100US and in return had a stash that filled my purse. ($1 = 63.2IND).  Currency calculations and shopping has been an inexperience in itself as vendors offer their wares with machine-gun-like rapid fire persistence and enthusiasm.

We find it difficult to believe that we are already more than half way through this amazing adventure - we really are much richer, even without those Rupees, for the experiences we've had on this 35-day Oceania cruise on board the Nautica.  We thank you for being with us. I have many more tales to tell about the Middle East, so move over Scheherazade, I may just top your tales that filled Thousand and One Arabian Nights.

For now, we have some flying fish and freighters to watch!

Linking this week with:
Travel Photo Thursday
Weekend Travel Inspirations
Posted by Jackie and Joel Smith at 4:45 AM