We were less than five hours into our road trip to Arizona last month when we had a most memorable welcome to Oregon, our neighbor to the south of Washington in the Pacific Northwest.

I’d just taken this photo of the beautiful weather in Oregon’s Blue Mountains when. . . 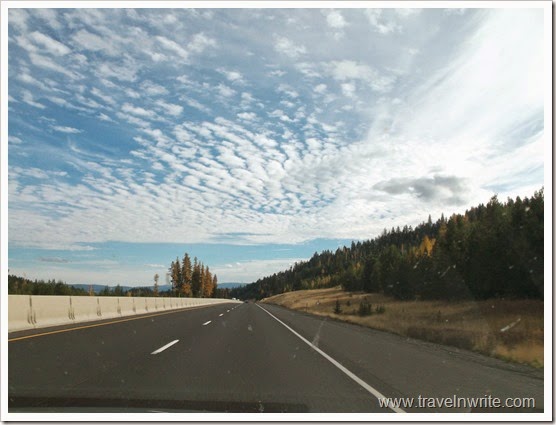 Oregon State Trooper-Less-Than-Welcoming,  ‘welcomed’ us to the state in a memorable, but not particularly warm way.

Note: I have been asked by regular readers if ‘bad things’ ever happen on our trips because I  prefer to tell you positive stories; the stories that will hopefully stir the travel bug in you. But sometimes stinky little things do happen like the story I am telling today:

The cast and characters:  Two 60-somethings, one with a AAA map and guidebook in her lap and the other the driver of our 2005 Toyota Camry. The setting: Interstate 84: somewhere near the summit of the Blue Mountains.  We were in the right-hand, outside lane when in the distance we noted a car pulled on the shoulder of the road, a trooper’s vehicle lights flashing also off the side of the road behind the car. Both were parked some distance outside what is called in the US as the ‘fog line’ which marks the roadway from the shoulder. You can see it in the photo above. 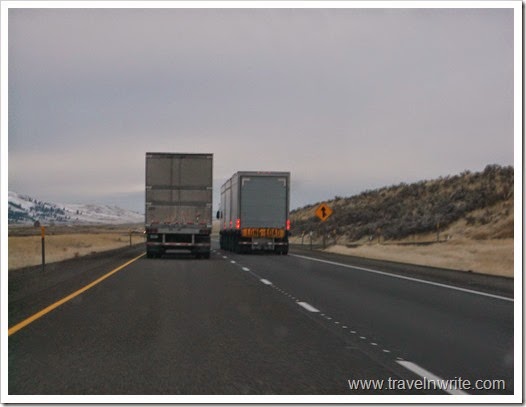 Thinking the trooper, who was sitting in his car, was getting ready to pull out, The Scout slowed and moved toward the left and center line.

Shortly after we’d passed, the trooper did pull out then pulled US over!

Trooper-Less-Than-Welcoming asked why we’d not moved completely into the left lane – called the passing lane – on our inter-state roads and in which drivers drive the speed limit or above because they are, well, passing. The Scout replied that when it appeared the trooper wasn’t pulling out that he returned to the slower right-hand lane.


BEEEP! . . . buzzer. . . .WRONG ANSWER!
Oregon has a “Move Over” law that requires motorists to move completely into the left-hand lane when any emergency vehicle it off to the side of the road with lights flashing.  Trooper Less-than-Welcoming pointed out our Washington State has the same law and then he informed us that all the Western States have the law. (Yes, we did feel like morons for not knowing that fact!) 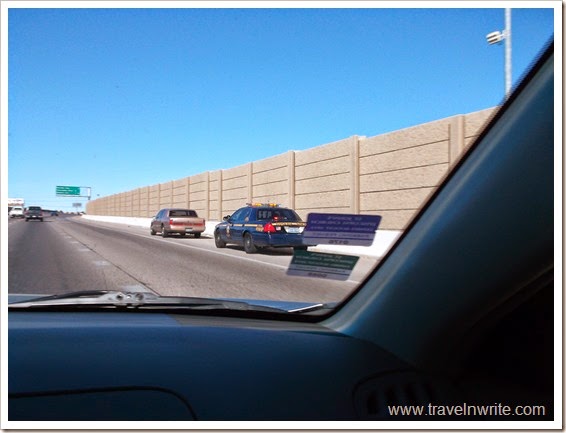 Now honestly living and driving in the traffic-gridlocked Seattle area, we don’t have the luxury of pulling into the left hand lane when lights are flashing on the shoulder. We slow, we edge around – we don’t MOVE OVER. We explained we hadn’t been aware of that fact.

Trooper Less-Than-Welcoming took the license and returned to his patrol car, a few minutes later (it seemed an eternity long) returned and presented us with a $260 ticket!

Now had he issued us a warning, we’d have still gotten the message. But because of his memorable welcome, had we not already had reservations just down the road in Baker City, I was ready to get the hell out of Dodge and head straight to Idaho.

Note: to Baker City businesses (my cute kitchen store and the art gallery, in particular) I would have come in as I always do – but my shopping money was headed to your state coffers. . .no money for you this time. 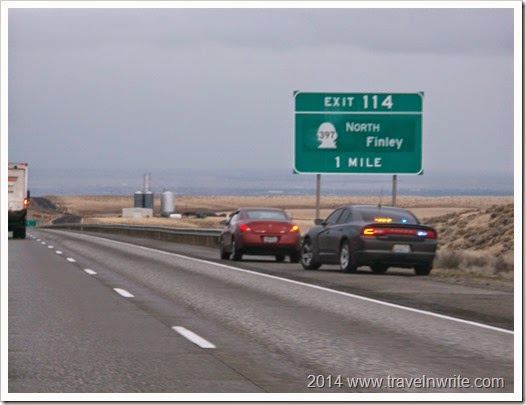 Had I had the opportunity to see Trooper Less-Than-Welcoming again (which thankfully I didn’t) I would have told him that after his ‘welcome note’ I began paying attention to those western states we drove through:

Idaho:  one sign as you enter the state which reads ‘move over or slow down’

Arizona: sign on Highway 17, “move over OR slow down”

Utah: In this ‘ride ‘em cowboy!’ state the speed limit is 80 and you pass in the left lane at 90 – I know as  I was driving when we saw the trooper pulled off to the side of the road ahead and to merge into that left lane – which I did -- our speedometer read, ‘93’ . . .I might note three cars going 80 stayed in the right lane and we all zipped past like bats out of hell. That, Mr. Trooper, isn’t safe!

Washington: as we concluded our trip and were within 10 miles of our home driving a stretch of Interstate 90 – where there are multiple freeway lanes – a trooper on the left side shoulder had a motorist stopped – NO ONE moved over. 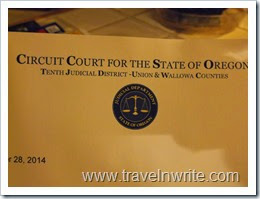 The Scout, who is a retired attorney, submitted his check for $260 and pleaded No Contest with letter of explanation.

We found a letter from the court waiting when we got back home seeking an abstract of his driving record – one that has no traffic stops on it for more than two decades and then it was for exceeding the speed limit. He submitted it.

A second letter arrived this weekend: his fine has been reduced to $130.

TRAVEL TIP: Next time we’ll drive via Idaho or fly.  We recommend that you do the same! The ticket for not Moving Over could have been $355!

Note: I did take these photos during our recent road trip.  I wanted to, but refrained from, taking photos during the traffic stop. Trooper Less-Than-Welcoming would likely have arrested me.
Posted by Jackie and Joel Smith at 9:08 PM