It sounded so simple:  Buying a cell phone in Greece to use here. We had chided ourselves for not doing so last spring.  Now we are back and it was time!

After all, we’ve become somewhat adept at using “Lloyd, the Droid” our smart phone acquired a year ago back home. How difficult could it be? We were soon to learn that answer. . .

Our first stop was, OTE, the Greek telephone company store.  Like all technology stores the youthful sales staff spoke (in English) knowledgeably about  phones, pads, pods and computers. They told us about plans and prices, pros and cons. Way too much ‘stuff’ for our needs.

There are three mobile providers in Greece (like Verizon and ATT in the U.S.) Vodophone, with its named splashed on the sides of ferries, WIND, with its youthful promoters prancing around big city sidewalks handing out advertising promotions and Cosmote, with signage plastered around the Athens airport, claiming to have the network with the largest coverage.

Turned out we did need Cosmote, who locals told us, really does have the best coverage for the area of the Peloponnese in which we are traveling.

So off to a hole-in-the-wall electronics store in the big city, Kalamata, where the young clerk spoke enough English to show us ‘devices’ and then tell us he didn’t have the SIM card for Cosmote. 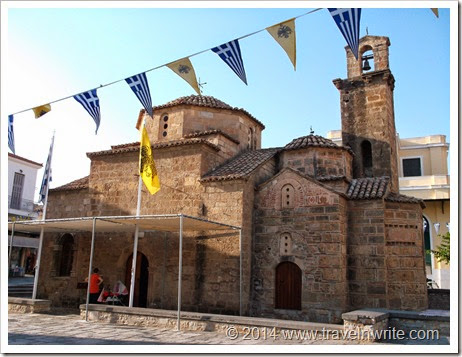 At the other end of Kalamata we managed to pick another hole-in-the-wall store, staffed by an old woman who spoke no English but managed to sell us a flip phone and Cosmote SIM card through use of a point-and-nod method.

“Good?” I asked of the Samsung phone we eventually purchased. She nodded.

“Passport photocopy” were the two English words she uttered.  We provided it and she then recorded every detail of that 5-euro SIM card on the back of the photocopy. For what purpose we had no idea.

After returning to Voula’s Hotel Vardia in Kardamyli we began charging the phone – soon, a bunch of Greek words appeared on its screen.  We knew it could be changed to English, but hadn’t been able to ask the saleswoman to do it.  So we’d unplugged the phone and headed to Voula's office. But the words would disappear by the time we got to reception. . . so I copied them down, took them to Voula and she said, “It says, ‘the phone is charged’.” 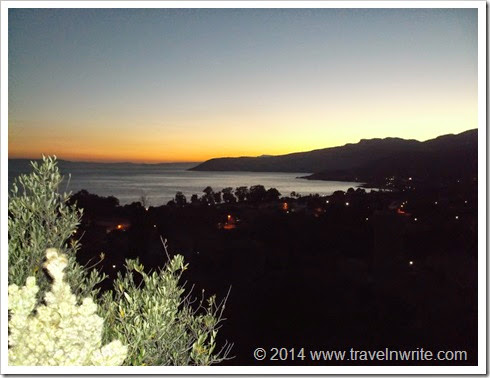 Voula’s youthful employee, Emma, translated the recorded Greek message which said the phone/card needed to be registered before it would work.  (But Emma at least worked some magic and got the English to start appearing on the screen).

Our friend Maria at the realtor’s office down the road in Stoupa confirmed that it needed to be registered and sent us to the nearby supermarket.  They understood the problem, but could only help if theyhad sold us the SIM card.

Next day we turned to Voula once again and she called the old woman who’d sold us the phone. Turns out that woman hadn’t registered all that information we provided her (that’s why she wanted the passport info). . .but with Voula’s encouragement, she did and two hours later the phone was working. . .

No, not yet – it still wasn’t working!

This time Emma made a ‘house call’ to our room and told us that the Greek recorded message was that we had no minutes. We’d purchased the phone and operating system but now had to buy minutes. So off to the supermarket down the street (which luckily is run by Voula’s mom). Fotini summoned a youthful employee who not only sold us the minutes, but did all the input to make them work! 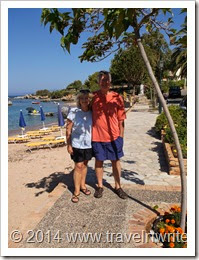 One phone, four days and  three villages of helpful people later, I am happy to report, our phone now works!

These two Techno Dinos have taken another step across that Digital Divide that now stretches to Greece!

For those who might be contemplating getting a phone to use in Greece:  Go to a store where the employees speak English, as your first step.

We bought a middle of the road model for 38-euros, the SIM card was an additional 5-euros and 200 minutes were 10-euros (that is the minimum amount sold).  Fancier models (smart phones and those with dual SIM card capabilities began in the low 100-euro range).

As for technology, the internet in the rather agricultural area in which we are traveling this weekend continues to be a cross between mystery and challenge.  Some days the strength is strong, other days non-existent so I’ll apologize again for not visiting my fellow bloggers nor responding to emails in a regular fashion. In fact I will post this post sometime – we have no connection today.
Thanks for the time you spent with us and hope your travels are good ones!
Posted by Jackie and Joel Smith at 11:34 PM