WA Weekend: A bus trip to “The Center of the Universe’

While the gray damp days continued to envelope our Seattle-area, an article I was writing for another publication forced me out of hibernation last week and to ‘The Center of the Universe’. 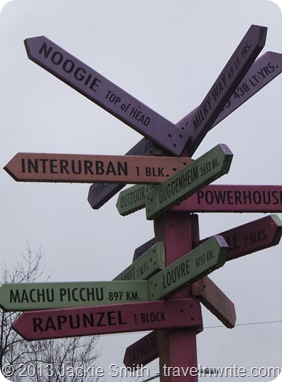 Really . . . I hopped the King County Metro bus at the stop near my Kirkland home and less than an hour later I was standing at the sign that marks Fremont, a Seattle neighborhood, as the self-proclaimed, Center of the Universe. 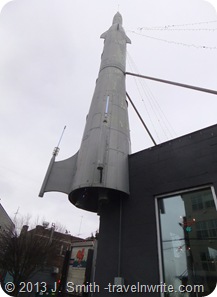 The area has several distinctive landmarks, like the circa 1950’s cold war rocket that’s been part of the Bitter’s Building at Evanston and 36th since the mid-1990’s.

It had previously been attached to a Belltown (another Seattle neighborhood) business and its dismantling there, provided the opportunity for its new home in Fremont. 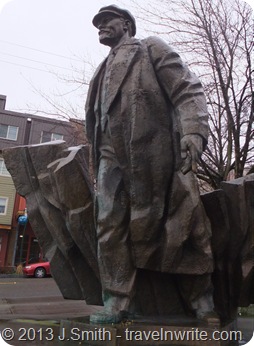 Then there’s the Lenin statue. . . one of those ‘love-it or hate-it’ pieces of art.

This 7-ton Vladimir Lenin was created by Slavic artist Emil Venkov. It was installed in Poprad, Slovakia in 1988 then toppled during the 1989 Revolution.   A Pacific Northwest man is credited with buying and saving this towering piece of history. 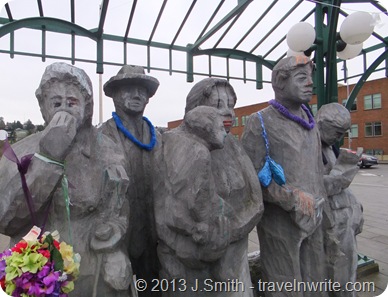 Perhaps the art icon of the area – at least the one most highly decorated (literally!) is the 1979 sculpture, Waiting for the Interurban created by Richard Beyer as a tribute to the light rail inter-urban that connected Seattle neighborhoods in the early 20th Century.  And then there’s the troll under the bridge. . .

. . .and their festivals -- like the Moisture Festival, Solstice Parade, and  Lenin Lighting -- span the year.

Streets in this rather eccentric, fun-loving neighborhood on the northern bank of the Lake Washington Ship Canal are lined with one-of-a-kind shops and eateries. Each Sunday more than 180 vendors and hordes of shoppers flock to its year-round outdoor European-style street market. I can’t tell you any more than that because it’s the gist of the story I wrote for someone else, but I will show you one storefront to tempt the shoppers out there: 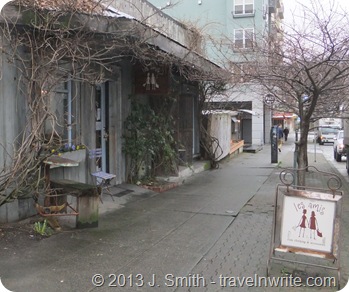 Metro bus:  From downtown Seattle’s Third Avenue, take 28 or 40.  From Kirkland take 255 into Westlake Center.  Tip: Ask for a transfer and you won’t need to pay for the connection to Fremont.
Use Metro’s Trip Planner: www.tripplanner.kingcounty.gov

My find:  Wine Tea Chocolate, a wine bar, coffee shop, tea house and chocolate shop all rolled into one at 3417 Evanston Ave. N. #102, 206-372-4747, www.wineteachocolate.com. This kid-friendly place (just down the street from a chocolate factory) has been open only five months and is already a local’s favorite – I only wish I lived closer to it. Definitely worth a visit!

What about you? Any places to recommend in Fremont?  How about your favorite neighborhood. . .use the comment section or jot us an email to tell us where it is and why it’s a favorite.
Posted by Jackie and Joel Smith at 10:17 AM