Sometimes our travels go as planned – other times they don’t. And when they don’t,  it’s because of a screw-up somewhere, like last week. . .

. . .when we were reminded of the importance of assuming nothing when planning a trip – no matter how short a getaway it might be. 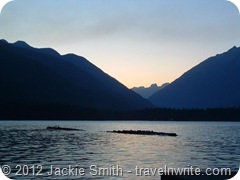 We’d decided last Sunday to head to Stehekin, that remote little hamlet on the head of Washington State’s Lake Chelan for a couple of nights.  Our destination the North Cascades Lodge, (formerly The Stehekin Landing Resort). Its water views (like pictured above) makes it our favorite among the half dozen rental properties available in this pristine gateway to the North Cascades. 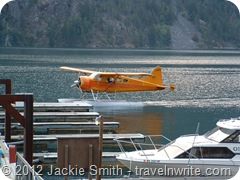 Stehekin can only be reached by float plane or boat (okay,you can also hike in but in 100-degree temperatures that didn’t appeal.)

When no one answered the reservation line phone Sunday afternoon, we used the Lodge’s computerized on-line system. Two nights in Room 16, lake view, $150 a night, beginning Tuesday. The computer-generated message told us a confirmation was forthcoming. 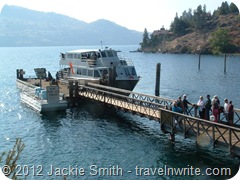 uckily – decided not to buy tickets on-line for the Lady of the Lake ($60 p/p, round-trip), the only public boat serving Stehekin, until after we arrived in Chelan on Monday. It’s the town from which you depart for Stehekin and where we planned to stay that night for our early morning Tuesday departure.

10 a.m. Monday, with our bags in the car, and no confirmation  in the inbox, I decided before starting the three-hour drive to Chelan, to check emails one final time for that confirmation and not finding it, I called the reservation line again. 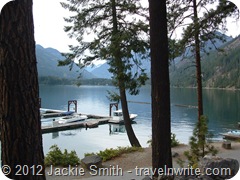 “Would that be a reservation for Joel Smith? I’ve got it right here,” said a perky voice on the other end.  “But. . . we have a problem. The computer seems to have double booked that room and the other people booked before you.”

Oh, she said, they’d had that same problem with the computerized system before but thought it was fixed. She offered  two other rooms at about $50 more each night or one at a $129 nightly with no lake view.  Neither option appealed.

We still wonder if, or when, we might have been told about the ‘problem’ had I not called.  At check in, perhaps?

Travel Tip:  The tip embedded in this post is: If you haven’t received a confirmation of a computer generated reservation – double check with the resort or hotel.

Photos:  Probably don’t need to tell you these Stehekin photos were taken during our last stay at The Landing Resort.

Have you ever had a problem with a computer-made reservation?  When and how did you discover it?  Any tips?
Posted by Jackie and Joel Smith at 7:48 AM