TP Thursday: The Train in Spain

We have limited options for train travel in the Pacific Northwest so we savor the experience when we are in Europe. In November, we traveled in Spain by train: 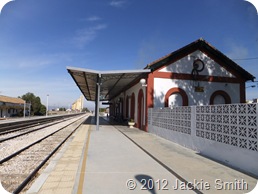 We first hopped aboard in Osuna, the town I’ve written about in earlier posts – Land of the Olives.  We loved its small station, opened in 1874. The agent who manned the ticket window also had the only desk job. Prior to each  train’s arrival, though, he’d put on his uniform’s cap and head to the station’s platform to manually adjusted the large levers that set the tracks in the correct position. 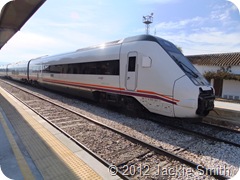 From that history-laden platform, we caught a regional, regionales, train - similar to this one - that delivered us to Malaga. Two tickets cost 22.40-euro, or about $31US.  We purchased them the day we traveled.

After spending a week on the Costa del Sol, we returned to Malaga’s station to catch a long-distance train that would take us north through central Spain, hurtling us as speeds reaching 300 kilometers an hour through Andalusia and its neighboring Castilla-La Mancha region to Madrid. 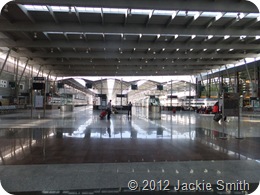 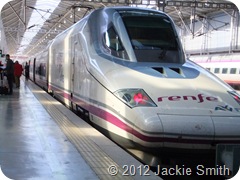 The trains are equally as modern . . .and large; very large. Renfe is the national train service that runs most of Spain’s trains. 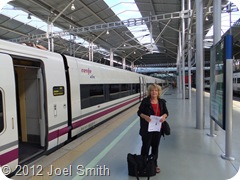 We walked past the engine pictured above to get to our car, half way down the length of the train. Note how far behind me the train stretches back to this engine.

The cost of our two AVE (the high speed train) tickets, which we purchased before leaving home and printed out on our computer (Malaga to Barcelona), was 316-euro, or $433US.

We would  have paid less to fly; it would certainly have been faster, but for us, the trip is as much about the journey as the destination and had we flown we would have missed scenes such as these: 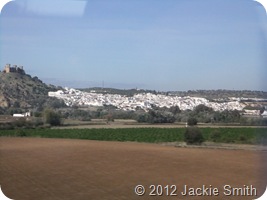 One of Spain’s “White Towns” – loved the castle on the hill to the left. 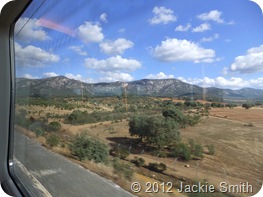 Spectacular vistas stretched for miles in every direction. . . 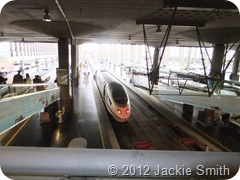 At Madrid’s Atocha Station we connected with the train that would  take us to our final destination, Barcelona, on the northeast coast.

Again we had a slide show of Catalonian towns through the power lines that often line the tracks. 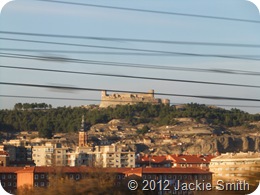 Trains are a ticket to adventure for us. Got any suggestions for our next train trip?

Today is Travel Photo Thursday so be sure to visit, Budget Travelers Sandbox for more photos and destination temptations.
Posted by Jackie and Joel Smith at 8:28 AM