Honu! A lulu of an afternoon!!!

Beach Boy and Hula Babe discovered Honu, (Hawaiian for turtle) last year in the lagoon near us at Ko Olina on O’ahu’s western coast.  We hoped we’d find our seafaring friend again this year but we’d been unsuccessful until today. . .

We arrived for some sun and sea time at the lagoon shortly before Honu arrived for a bit of an afternoon nap. 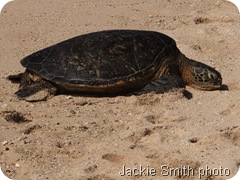 The amazing thing is that while Honu napped, Honu’s twin decided to take a look at  the humans that were in the lagoon. (It is a violation of federal law to approach a honu as photographed above – I used telephoto setting and stayed more than 10 feet away --  but nothing prohibits them from exploring us). 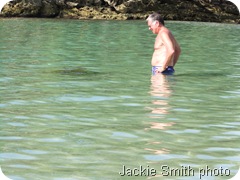 And then decided to head toward Hula Babe who chose to keep a good distance between us (thus the blurred photo): 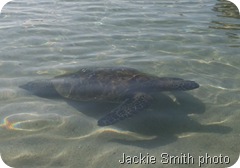 Tonight Beach Boy and Hula Babe are  both sunburned; we couldn’t pull ourselves away from the lagoon once we saw Honu and Friend, but we are delighted to have seen these magical creatures again.  Hopefully we’ll have another encounter before our time here comes to an end.
Posted by Jackie and Joel Smith at 10:39 PM