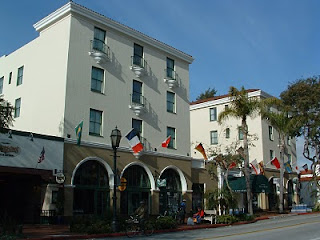 We love old hotels; those classic old structures from yesteryear that someone or some corporation has had the sense and cents, to keep operating. We had plenty to choose from in Santa Barbara - the tourist association lists six.

They don't always have the latest of gizmos, and they are not necessarily the best travel buy, but they offer a glimpse of both the present day and a bit of history to a trip.

Both hotels are from the 1920's so each room is slightly different - not necessarily large or sound-proof but delightfully charming and full of character. The Hotel Santa Barbara (pictured on this post) was actually a bit more upscale and far more spacious in the lobby area. A continental breakfast was included in the room price at each place.
Posted by Jackie and Joel Smith at 8:58 AM