Paris Postscript: getting around 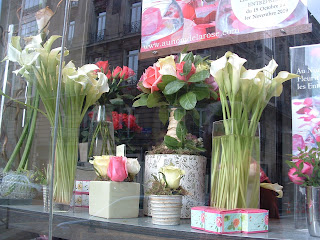 There's no better city for strolling than Paris with its long, wide tree-lined boulevards and narrow sidestreets that twist and turn past centuries old buildings. We've strolled on snow dusted sidewalks in March, through downpours of rain in late October and under rays of intense September sun ~ and it ranks as our favorite way to see this city. These strolls are perfect for window shopping, my two favorite stores being the floral shops 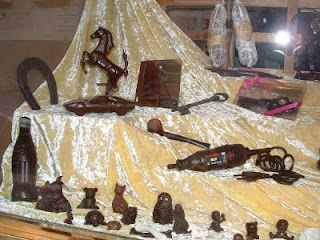 and, of course, the chocolate shops' art displays.

While we love the strolls, it is nice to hop the Metro to get back to the hotel when the weather is particularly nasty or our throbbing feet tell us the stroll has become a hike. It took awhile for us to get the hang of the efficient mass transit system coming from an area of the Pacific Northwest where the addition of lightrail was this year's headlines. Now we find using Paris's underground system as easy as the guidebooks told us it would be. Paris Visite passes are available for single or multiple day use and single tickets are sold in carnets or packets of 10 tickets. Because we like walking we opted for the carnet, which we purchased at the Metro station. The carnet at 11.60E ($17.40US) was a savings over the single ticket price (1.60E each way) of 16E ($24). Tickets can be used on RER trains in the city, buses and Metro. Bus 69 is recommended in tourist guides for inexpensive sightseeing -- and it is -- but we've found every bus to be a great sightseeing route. 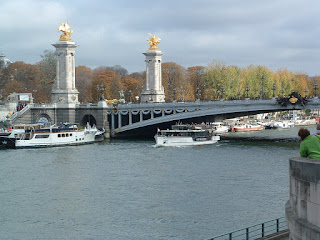 Batobus, (http://www.batobus.com/) operates river boat taxis that travel the Seine making stops at eight notable locations in Paris, including Notre-Dame, Louvre, and the Eiffel Tower. A day pass, that allows hop-on, hop-off stops is 12E these days. Multi-day passes are also available. From the back deck of the boat you can get some great photos although the glass enclosed walls and ceilings can get a bit steamy when sitting inside with a large group of other tourists.

We traveled from Charles de Gaule (Roissy) airport using the Air France bus, Les Cars, (http://www.cars-airfrance.com/). You don't have to fly Air France to use the bus. We made a rather costly decision to buy two one way tickets at 15E ($22.50US) per ticket instead of buying round-trip tickets at 24E ($36US). The bus makes several stops in the city; one of which was two blocks from our hotel. We had considered taking a taxi to the airport but as our desk clerk pointed out, both bus and taxi will get stopped in the commuter crush - so the taxi wouldn't get there any faster - but its price isn't set as is the bus.
Posted by Jackie and Joel Smith at 7:28 AM