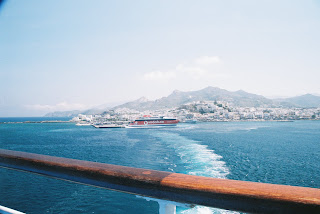 We are heading to some Greek Islands for five weeks this fall. Which islands, we don't know.
And we may not know until we catch the ferry to get us where ever we end up going.

What we do know: We'll fly Seattle to London Heathrow on British Air, spending a night at the Courtyard Marriott, (http://www.marriott.com/) walking distance to Gatwick, from where we will fly out early the next morning on an inexpensive Easy Jet flight to Crete.
We have reservations in Chania for a week-long stay at Lefka Apartments (http://www.lefka-apartments.gr/). The complex comes recommended by TripAdvisor members (http://www.tripadvisor.com/) - in the past we've relied on their opinions and stayed in nice, but inexpensive accommodations. After spending a few nights there in spring 2008, we vowed to return to this old Venetian port city which allows further on-foot exploration of it. We continue to search rental car web sites but may opt to use public bus service to explore the neighboring villages.
We have a flight booked from London to Seattle five weeks after our arrival in Greece - we don't yet know from where we will be departing to connect to the London flight.
One thing is for sure, because we don't know where we are going, we've had to expand our research. With this trip, we have considered revisiting island favorites from our spring 2008 trip as well as expanding our travels to Symi Island and Rhodes, both near Turkey, which prompted new considerations . . .a stop in Istanbul perhaps? Among favorite web sites are: http://www.greeka.com/ and http://www.symivisitor.com/
Plans are that we will each of take a wheeled 21"-carry-on bag and a smaller bag. . .a large 'purse tote' by Baggalini Bags for Jackie with a smaller everyday Baggalini packed in it. Joel will have a small bag with documents and books to read during the flight. (We don't do Kindle - we take paperbacks). Travel clothing will include Chico's, Ex-Officio and TravelSmith labels - all which can be washed and dried overnight and don't require pressing.

We've purchased a 2.7 pound NetBook by Acer; it's loaded with Microsoft XP and provides internet connection. It is easily tucked into the side pocket of the Baggalini. If we can figure out how to connect its three-pronged cord to an adaptor for Greece we will have it made. Jackie is reluctantly entering the digital camera world, leaving her bag of film canisters and 35-mm camera at home.
Posted by Jackie and Joel Smith at 6:18 PM