It was all there: places we’ve ‘known’ since long-ago Sunday School teachers introduced us to Bethlehem and its Manger; Jerusalem and its Tomb. Our young imaginations were unleashed by those lessons and stories, in turn, enabling us to create images of both places and people.

However, as a child the thought of ever seeing these places was really quite unimaginable.

Then, decades later, on a warm spring Saturday we found ourselves in Israel. Finally, those  imagined places would become reality.


It almost seems sacrilegious to cram a visit to Bethlehem and Jerusalem into a single 12-hour period.  There is far too much to see and far too much history to absorb in such a short time. But sometimes travel reality trumps the imagined itinerary as well.

We’d lost one of two days planned for touring Israel when our cruise ship was delayed for a full day in transiting the Suez Canal. In order to see as much as we could in a single day that we had remaining, we signed up for a big-bus cruise ship tour (12-hour, $195 p/p). We’d depart from Oceania Nautica’s cruise ship, docked in Haifa, at the ungodly hour of 6 a.m. 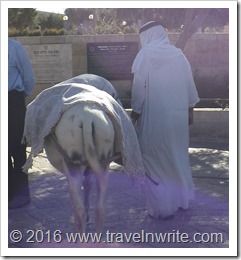 First stop, some two hours away, was the Mount of Olives for a panoramic view that stretched out over the old –walled city of Jerusalem, Dome of the Rock and the sprawling modern city that has grown around them.

In this small, overly-crowded area we had one tourist tout leading a camel and offering rides; he competed for business with the man, walking along side his donkey carrying a sign that read, “Take a ride with Jesus”. For a price you could have your photo taken atop the donkey with the Jesus impersonator.

“We’ve got Egypt to the south, Syria to the North and Lebanon, Egypt and Jordan to the east. That’s the neighborhood. It’s a tough one. Thanks for coming to visit. I am sure you got those looks from family and friends when you said you were coming here.”

- Our tour guide, as we traveled past Tel Aviv en route to Jerusalem

Obviously from the crush of tourists – all vying for the best view point, the best photo angle and the best selfie, there were a lot of people visiting despite real or imagined threats to safety. A parade of tour buses stretched for miles on this warm Saturday morning. The Israeli/Palestinian unrest wasn’t keeping everyone away.

Despite the gaggles of tourists everywhere we went, it was interesting to finally see places that we’ve ‘known’ all our lives; places like the Garden of Gethsemane, the site of Jesus’s betrayal and the magnificent Roman Catholic Church, known as the Church of All Nations (aka as the Church or Basilica of the Agony), that stands next to it.

We followed a maze of narrow pedestrian streets through Jerusalem’s walled old city. Being on a tight timeline and being jostled and bumped by competing tour groups and local shoppers we had no opportunity to stop at the inviting stores that made up this bustling souk. Our path led from the Wailing Wall to the Church of the Holy Sepulcher – on the Via Dolorosa, the route on which Jesus carried the cross to his execution (at least the route as it was defined later in history by the Crusaders).

I couldn’t help but think of the story of Jesus chasing the merchants and money changers from the Temple when he returned to Jerusalem for Passover when I saw this sign along our route on the Via Dolorosa . . .

Our tour guide who'd been with us since boarding the bus and who provided most of our day’s narration was Israeli. Because Bethlehem is in Palestinian territory, another guide – a Palestinian – took over the narration and led the tour of that portion of the day’s outing.  She led us to the Church of the Nativity and Manger Square, both places where reality was very different from those Sunday School imaginary places. We went under the church to a stone-walled small room (not for the claustrophobic) and there peeked through a small hole in the wall at the room said to be ‘the manger’. As our slow-moving line inched past those who'd peeked into the manger, we decided the less time spent in this underground dungeon the better.

In addition to the Holy sites our whirlwind tour had taken us past lush agricultural fields and suburbs with towering high-rises that housed some of the world’s tech giants.

Sadly, what may have been far more moving than scenes dating back 2,000 years, were those, like 'the wall'  that spoke of the present day:

We'd had a long and interesting tour. Perhaps with fewer people and a slower pace, we'd have reacted differently to the sites we visited.  Many had told us in advance of our visit of their experiences in which they had wonderful - downright, moving - reactions to the place. We didn't. Someday, maybe, we’ll get a chance to return. We likely won’t go out of our way to do so.  There are many other places along our Magic Carpet Ride of a cruise route that we’d rather revisit.

The brief stop did spark an interest in knowing more of the story and for those of you history buffs out there, we highly recommend, Jerusalem, The Biography, by Simon Montefiore: 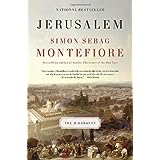 Next week, we’ll conclude our Middle East cruise tales with a stop in Turkey. Then we'll be heading back to our other life at The Stone House on the Hill in Greece and we've got some road trips to take you on while there!  As always thanks so much for the time you spent with us – hope to see you back again soon.  Happy and safe travels to you and yours~

Linking up with:
Mosaic Monday –
Through My Lens
Our World Tuesday
Wordless Wednesday
Travel Photo Thursday –
Photo Friday
Weekend Travel Inspiration
Posted by Jackie and Joel Smith at 7:12 AM