Marking time on The Red Sea

Having left Jordan a few hours early last night it seemed we had a bit of time to kill this morning so we cruised in circles on the Red Sea for a period of time before entering the Gulf of Suez. 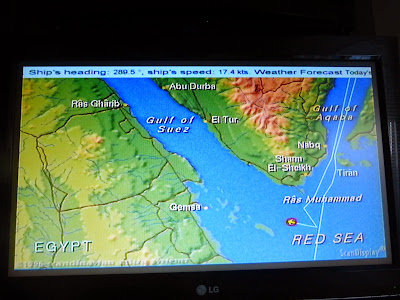 We will transit the 120-mile (193.3kilometer) Suez Canal on Thursday; a journey of some 11 to 16 hours. You don't just sail through - you fall in line and await your turn.

The anticipation is so strong it fills the atmosphere on our Oceania Nautica. And again I am reminded that each time I say 'it doesn't get any better' the next day proves it does!

Speaking of days, we are at Day 29 of this cruise that seemed it would last 'forever' when we boarded four weeks ago in Bangkok, Thailand. We are less than a week away from the end of this magical adventure aboard this small ship that has become our world.  We've followed ancient Spice Routes and crossed the desert that Lawrence of Arabia made famous and still have yet to visit the Holy Land, Turkey and Greece.

"Where did the time go?" we've all been asking as we reluctantly talk of our plans for after the cruise.

This 35-night cruise, that sailed from Bangkok with a final destination of Istanbul, Turkey, actually began for some  in Tokyo, Japan. They will have sailed for more than 60 days at the trip's end. Several others are staying on the ship and sailing the next segment to Lisbon, Portugal before disembarking.

We, as you regulars here know, will 'jump ship early' in Rhodes and head to The Stone House on the Hill, AKA our place in Greece.

While our ports of call have been an overwhelming and memorable kaleidoscope of cultures, religions, sights, sounds and smells, that have filled our heads and our hearts to the point of bursting; we've also been enriched by the people we've met on the cruise ship. Many of whom have become friends (and travel inspirations) with whom we plan to stay in touch after our floating world disbands and we all head to different points in the world.

"I love these people on this ship," said Ruth- a fellow passenger- one night, "they understand me and my love of travel - sometimes people back home don't." This live-wire who lives in the United States had recently spent four weeks in Israel.

The people we've met ARE travelers - some who make us look like old stay-at-homes by comparison. One couple we've befriended is busy working on Chinese visas to be ready for another OAT (Overseas Adventure Travel) trip that will start soon after the cruise ends.  They plan a return to Cairo after disembarking in Istanbul. Many of our fellow cruisers are also regular OAT (land-based tours) travelers.

An English couple spent two nights at the same hotel in Yangon, Myanmar where we stayed . . .the old historic Strand Hotel (a place I'll tell you more about when internet allows for a few more photos). We simply researched hotels and booked them while aboard the ship. During a ride in to Phuket we discovered we were heading the same direction at the next port-of-call so we shared a taxi  and had two fabulous days in Yangon.

Oceania Cruise Lines has been superb about allowing enough nights in certain ports of call for such independent adventures. The ship also has offered some overnight packages, but welcomes the independent traveler as well. For example:

*One group of independent travelers went from our port of call, Safaga, to Cairo, Egypt and
spent time there, rejoining the ship a few days later in Aqaba, Jordan.

*Several left the ship in Cochin, India and flew to the Taj Mahal, then rejoined the ship in
Mumbai. Some went on a ship's tour and others planned their own.

We've participated in a mix of ship's tours and those we've booked on our own. While the ship's tours have been good, following a tour-guide's umbrella down the street like ducklings just doesn't compare to the thrill of the two of us climbing into a beat-up pickup driven by a Bedouin guide and setting out through the roadless sands of the Wada Rum - the vast desert you may recall from the movie Lawrence of Arabia.

This may be our favorite cruise routing ever and we'd do it again in a nanosecond, but even better, we've convinced ourselves that overland travel in Egypt and Jordan are possible. We are beginning the plans to return . . .

Thanks for joining us as our journey continues.  We appreciate your time, the wonderful comments you've left and your good wishes.  When I get back to internet land, I'll show you more photos of this amazing part of the world ~ you may not hear from us again until we reach Greece, where there may or may not be internet for a few weeks! Rest assured. We are well. We are happy. Hope you are, too!

Posted by Jackie and Joel Smith at 3:59 AM