The Stone House on the Hill ~ Welcome! 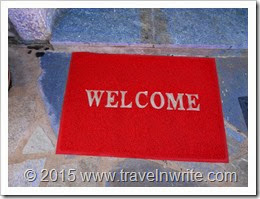 While we were in Greece we speculated on who might actually visit us there in the future. We’ve begun honing that list now that we are back in the States based on some of the responses we’ve had to our Stone House on the Hill.

Some wrinkle their noses, not quite sure what would draw us there – let alone, bring them to visit. Others furrow their brows, they still aren’t quite sure where ‘there’ is.

Yet, others brighten at the news. They tell us of their Greek travel memories or of their dreams to visit the country.

Some haven’t remarked at all. We are definitely getting a feel from the varied responses, for who may - one day - be walking across our bright red ‘Welcome’ mat!

One friend, who’s owned a second home in a sunny climate for a few years, remarked, “You don’t really want people to visit, do you?” She’s had some, shall I say, less-than-pleasant experiences.

At about the same time, an American blogger buddy of mine, Karen McCann, who with her husband lives most of the year in Seville, Spain, wrote a post entitled, 7 Habits of a Considerate Houseguest (she’s had a few and some who weren’t).

On the flip side, we've had two friends tell us that if they come, to provide them a list of needed items, and they'll pack an extra suitcase for us.

For now, we have the welcome mat out. The area is just too darn nice not to share with others!

So many who are pondering the possibilities of a visit have asked us logistics and cost questions about getting to The Mani in the Greek Peloponnese where our home is located, that I thought today I’d answer some of them. 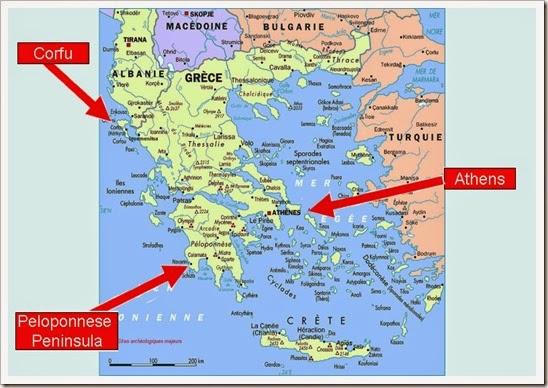 Where do you fly to? What is your routing?

We fly to Athens, about a  4.5 hour-drive from our home in Greece. We fly out of Sea-Tac Airport near Seattle, Washington in the US Pacific Northwest. We shop around and choose the routing by 1) cheapest price, 2) with least amount of layovers and plane changes. The trip from Seattle  – with those layovers and plane changes – usually takes in the neighborhood of 20+ hours. The good news it is usually an over-night flight and you can sleep most of your way to Europe. And with the time zone changes, you arrive in Europe in early to mid-morning the next day.


Two routing examples: In spring 2014 The Scout nabbed us a ‘steal of a deal’ with a round-trip via Istanbul, Turkey for $608, round-trip, per-person. We flew Lufthansa Airlines from Seattle, with a plane change in Germany. After spending the night (hotel points) at the Courtyard by Marriott, in Istanbul, we caught the morning commuter flight  (Aegean and Olympic Airlines both have them) to Athens the next morning. Those flights of less than two-hours were about $180 round trip. And this routing allowed us a stay in amazing Istanbul on our return. We plan to do that on future trips, no matter which European ‘hub’ we fly in to: Amsterdam, London, Frankfurt, Paris, Istanbul  – are all possibilities depending on the airline.


This last December we adjusted our travel to avoid the horrendous ‘holiday hike’ that hits in the middle of the month.  We used Alaska Airline frequent flyer miles to get us to Chicago and then flew Delta round-trip from there to Athens for a bit more than $800 round trip. It was a reasonable price considering we were hovering at 'holiday season'. We changed planes in Paris, then flew to Athens, rented a car and set out for The Mani.

Flights on European low-cost carriers to the city of Kalamata, just over an hour’s drive from our house, originate in any number of European cities. Flying into Kalamata would certainly simplify getting there, in terms of times and price.

We found an Easy Jet flight in June from Kalamata to Vienna for just over $100US, for example.  We aren’t sure how useful those flights will be as our time at the house will likely be in the early spring and late fall – after those seasonal flights have quit operating. They’ve extended the season this year and everyone is hopeful they keep extending it. Who knows? Might be year-round one day! 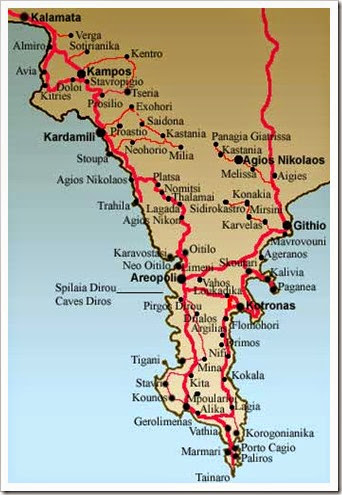 Yes. Major rental car companies (Hertz, Sixt, Avis, etc.) are represented at the rental car lot at the Athens Airport. It is a short walk to that lot from the arrivals terminal. Then a right turn out of the lot, a right turn and you are on the freeway – heading to The Mani. You will not end up in the middle of Athens in a traffic jam. (If you are seriously coming to visit, I have more detailed directions).

The drive from Athens to Kalamata is on a modern freeway. It is a toll road, so plan on paying about 15-euros in tolls total along the way. Get some euros from the bank machines at the airport if you didn’t bring some with you. The amount of each toll is flashed on a screen as you approach the teller window and you must pay in cash - they do have change for bills. 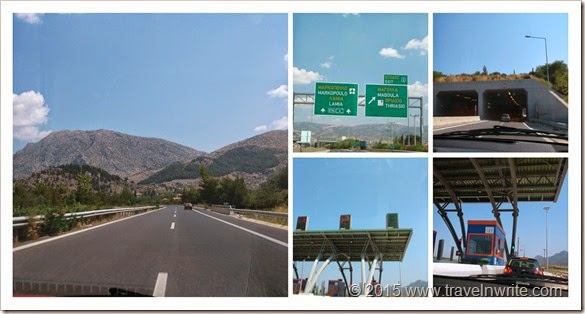 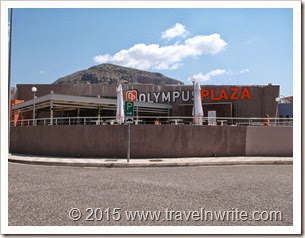 Like in Italy, the Greek roadside comfort stations are worth stopping at because they are so incredibly nice. Bathrooms are clean, restaurants are amazingly large, and most have souvenirs for sale.

It is easy to pull off and on the freeway, unlike the Costa del Sol in Spain where you say a prayer and take your life in your hands with each entry. Here the exit and reentry ramps are long and easy to use. 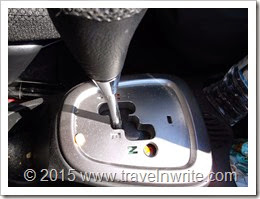 Car rental prices vary, so it is best to shop around.  Figure 20 – 25 euros a day. (We have heard rentals can be had for as little as 11-euros a day but we haven't yet found that.)  Small cars here really are small. Two roll-aboard sized suitcases will stuff the backseat. Either pack light or book a larger car.  US citizens do not need an International Driver’s license. And yes, for those who’ve asked about ‘automatics’ they do rent them. I have pictured an automatic shift to the side. It requires shifting from first to second but it is done with the hand lever - no feet pedals for shifting.


A stop in Kalamata 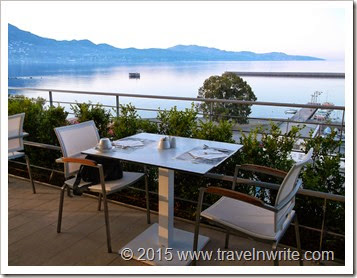 The modern freeway ends at Kalamata , about three hours from Athens, and becomes a scenic, but curving two-lane road into The Mani.  For that reason – and the fact that we’ve been up for some 24-hours with cat-naps and airplane food keeping us alive – we have spent the night in Kalamata.  We’ve stayed at a waterfront hotel - Phaerae Palace -- that has one of the best European buffet breakfasts we’ve ever eaten included in the rate, for about $100  (depending on the season) a night in a room with balcony and view of the water. The breakfast is served in the rooftop restaurant (photo on the right).  Then we head out refreshed the next morning.


If you spend the night there, the town’s Archeological Museum in its historic district and the open air Municipal Market are worth visiting before setting out on the final leg of your journey. 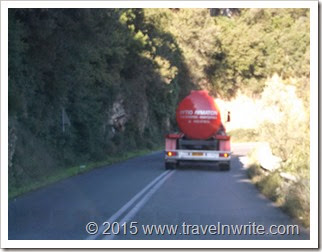 The last leg of the journey takes about an hour and a half, especially if you get behind a large truck as we did when I took this photo.

That’s another reason to complete the journey in the morning’s daylight – when wide awake!

You probably will want a car while you are in The Mani, but you could wait and rent one after you get out of Athens or Kalamata. There are rental car companies in Stoupa, the small village very near our home. 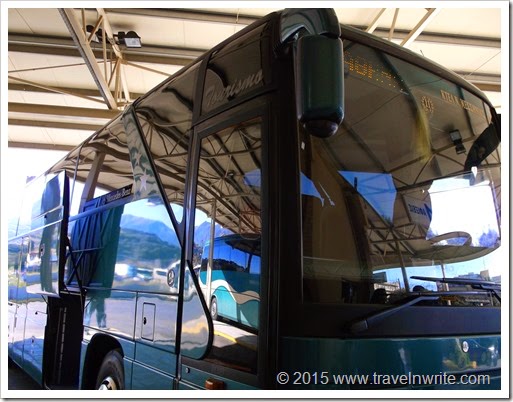 And yes, there are long distance buses that run to and from the villages and Athens -they connect in Kalamata.

In Athens there is an express bus (5-euros) will take you to and from the arrivals/departure terminal at the airport and the bus station where buses leave for Kalamata and other destinations.  We took the bus from Kalamata on our return home and it was a modern, Mercedes Benz, and the driver was great. This express bus from Kalamata took three hours and 15 minutes to reach Athens and the tickets were 22-euro per person. It would cost a bit more from the villages near our house. 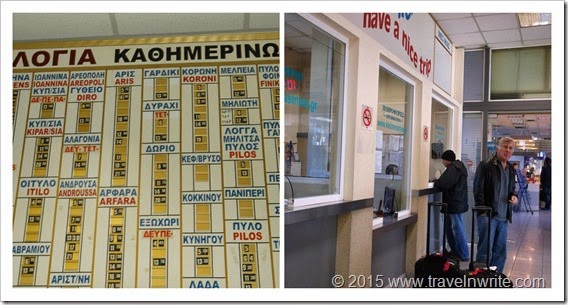 4.  Does anyone there speak English?

Yes, nearly everyone we’ve encountered speaks English and on the occasion we are in a situation of no-English, they always find someone nearby who does speak the language and will help out. That’s not an excuse not to visit!

We’ll tell you about our neighborhood and the foods – the nearby cafes and tavernas and the markets – in a future post.  Thanks again for stopping by as always we appreciate the time you spend with us. Hope you'll recommend our blog to others you know ~ thanks to those who've done just that!