And so it began, our new chapter in Greece.  We’d caught that daydream we’d been chasing for nearly a year.  There we were – finally - in that Stone House on the Hill on a chilly December afternoon, ten days before Christmas – the purchase completed only hours before.

Despite having visited it so many times during the ‘purchase dance’ we did with the sellers, it was still a bit odd walking into the house that first time as its owners. The dancing was over; reality hit. It was time to get to work on all those, ‘we could do. . .’ and ‘what that place needs is . . .’ challenges we’d given ourselves.

And we had only 28 days before our flight back to the States.

As part of the deal we’d purchased the place ‘furnished’. . .a house that had a hospital white interior (floor tile, walls and ceiling) and its main level crammed with well-worn, out-dated, over-sized furniture.

It’s downstairs was filled with boxes of belongings of the sellers – they would be stored with us the first week of ownership waiting for shipment to England.

Step One: Out with the old. (Not a lot of takers for the old stuff – but we did get rid of it!)

Step Two: Give some life to the sterile interior. (Painters arrived the first week!)

We used red for accent on the stairway to the bedrooms and on the fireplace. Softening the wall colors with a ‘meadow yellow’ or ‘biscotto’ color.


And have opted for a country-style décor in this country home set in an olive grove.

We paid tribute to the lemon trees in our garden, with bedding printed with lemons and our bed and bedding  colors, are blue, yellow and green.

As soon as the boxes were moved out, we turned our attention to the downstairs, an area we call the guest suite, or The Garden Suite. Here we gave a nod to the plant, Lavender, by painting the sitting area a pale green and the bedroom lavender.

Again, we warmed it up a bit with garden/country flavor:

And we were at the end of our stay by the time we got the walls finished in the bedroom, but we'd made a start! There’s a lot more to do to decorate this place, but that will come in due time. We look forward to the scouting trips for accent furniture, wall décor and other adornments that are out there waiting to be found. 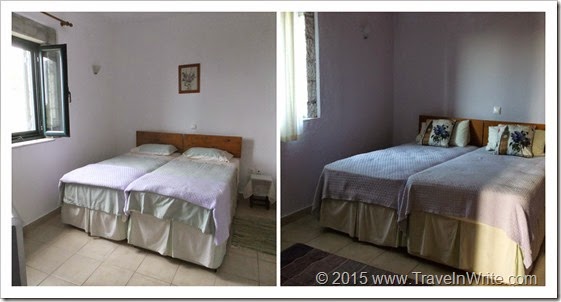 Sorry for the length of this one, but so many of you have asked to see the interior that I had to do a bit of ‘show and tell’ today.  Next week, I’ll show you what we got accomplished in the garden when the weather permitted as well!  Thanks for being with us today!

Now that I am back in the land of internet, I am linking this week with:
Travel Photo Thursday – Budget Traveler’s Sandbox  Travel Inspiration – Reflections En Route  Mosaic Monday – Lavender Cottage Gardening
Posted by Jackie and Joel Smith at 8:13 AM

Email ThisBlogThis!Share to TwitterShare to FacebookShare to Pinterest
Labels: Boomers in Greece, Greece, Peloponnese, The Mani, The stone house on the hill, TPThursday