We meet some of the most interesting people when we travel.

Many times, it is while sitting at a bar during Happy Hour.  Like that evening in Hawaii . . . 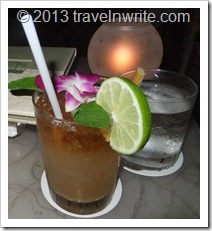 Doug and Carla Scott, were sitting a couple bar stools away from us one evening at  Chuck’s Restaurant on the Ko Olina property on the western shores of O’ahu, Hawaii.

While sipping our Happy Hour Mai Tai’s, I overheard Doug  tell someone they were sailing to Fiji.

Because we are heading that way ourselves this fall, I asked about the cruise line they’d be taking.

Silly me!  These people are sailing themselves to Fiji.

As is the case when strangers, who share a passion for travel meet, the conversation continued long past Happy Hour.

These two nautical vagabonds met and married in Oregon. In fact, the first time they sailed together was on the Columbia River. Then their work lives took them to landlocked Albuquerque, New Mexico for the next 18 years.

Leaving the Conventional Life Behind


They didn't shake their sailing 'bug' in the high desert and by 1988 were researching sailboats; they also had decided to sell  ‘almost everything’ and buy one.  In 2000 they found Moondance, a blue water cruiser for two, (pictured above) had her shipped to California and lived aboard her for eight years getting ready to begin the life of cruisers.

After leaving San Francisco in 2008, they spent a year and a half sailing around the Sea of Cortez and by February 2011 were in Banderas Bay on Mexico’s west coast preparing for the Puddle Jump to French Polynesia. 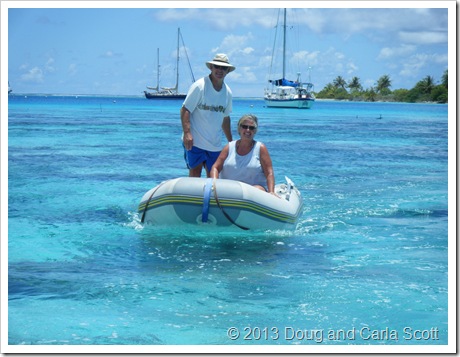 In April 2011 they spent 22 days sailing to the South Pacific; they spent seven months there exploring Marquesas, Tuamotus and Society Islands, Moorea, Huahine, and Bora Bora. The photo above was taken at Tuamotus Bay. 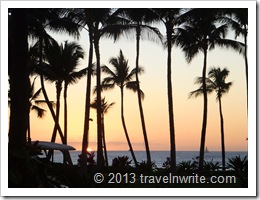 They arrived at the Ko Olina Marina in January 2012 and decided to make it home for the next year and a half.

Our chance Mai Tai encounter happened at the end of their stay, just as they were beginning preparations to head out again for the South Pacific.

The four of us planned to continue our conversation while we were all at Ko Olina  (we were at our Marriott timeshare home) but never quite managed to get in more than a brief chat . . .usually during that popular Chuck’s Happy Hour.

But we’ve stayed in touch and are now following Doug and Carla as they are sailing to the South Pacific.

They’ve sailed 1,200 miles from Hawaii to Fanning Island and on July 4th arrived at Christmas Island, both part of the Republic of Kiribati  made up of  33 islands spread over 2,400 miles.

If their story has sparked your wanderlust, check out their blog, by clicking this link:  Following Moondance for their tales of the South Pacific.

That’s it for Travel Tuesday the day we feature either tips or tales about people and places! If it is your first visit, we hope to have you return soon. And to our many regulars – thanks so much for continuing to travel with us!
Posted by Jackie and Joel Smith at 7:10 AM