Vegas tourism seems to be on an upswing.  A single convention of broadcasters brought 85,000 people to the city while were there (and there were three other significantly-sized conferences going on at the same time). We arrived albout the same time as contestants in -- and spectators of -- the weekend's International Bull Riding Competitions.

Hotel room rates aren't quite the deals they were last year but can still be found with a bit of research.  Another way to save money and have a great time in this 'adult Disneyland' is to seek out Happy Hours where beverages and/or nibbles are offered at cut-rate prices for an hour or two in the late afternoon or early evening, sometimes longer. Times and deals vary with the establishment. Our recommended spot:

The Paris Hotel and Casino's Napoleon Bar where Friday evening we sipped two tall chilled draught beers for $6; a steal by Vegas prices. And while enjoying our cool ones we were treated to one of the best shows we've seen in a Vegas lounge - and it was free. 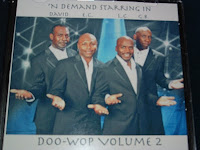 Napoleon's is a sprawling French-themed and decorated bar, located between the casino and convention wing of the hotel; a place where we've seen on previous visits two pianists perform 'dueling piano' medleys.  The entertainment line-up on weekends has gone doo-wop and Motown with  'N Demand , a talented four-some who not only had those of us in the audience in the palms of their hands but had folks walking past the bar clustering at its windows to watch.

The group is performing Friday, Saturday and Sundays at 6 and again at 7:30 p.m. Their hour-long performance -- not to mention the Happy Hour drink deals -- is more than a reason to head to Napoleon's. And if you can't make it to a performance, click their name to see a sample of their show.
Posted by Jackie and Joel Smith at 7:21 AM