Getting our Kicks On Route 66 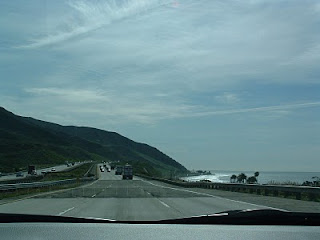 We began our road trip in Santa Barbara following Highway 101, that wonderful stretch of highway that follows the Pacific Coastline. We headed inland and around Los Angeles via Pasedena, looping just south of the San Gabriel Mountain's sparcely snow capped peaks. 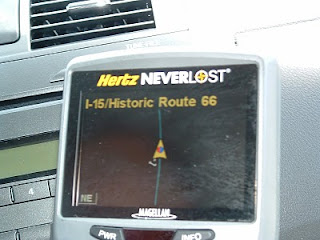 We had just entered the desert country when the fancy little gizmo in the rental car alerted us to the fact that we were on the Historic Route 66. We don't use GPS things, preferring the old fashioned map system but this came with the car and it was on so it provided some entertainment. . .and we wouldn't have known we were on Route 66 without it as it wasn't marked by roadsigns. It was a kick so we should have suspected it, right? 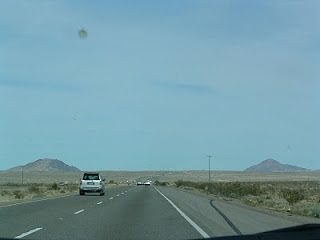 Our route (pun intended) took us between Death Valley National Park to the north and the Mojave National Preserve to the south. A long barren stretch of highway - the topography a sharp contrast to the lush tropical beachside we had left.


The dry desert landscape was misleading as we found ourselves climbing - in fact reached 4,730 feet at Halloran Summit - much higher than our Snoqualmie Pass back in Washington State.

We made a brief stop in Barstow and had lunch - couldn't see much reason for staying there any longer (apologies to anyone reading this who lives there. . .but what does one do when one lives in Barstow anyway?) 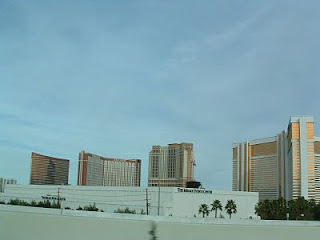 We arrived in Summerlin, just northeast of downtown Las Vegas seven hours after we had left Santa Barbara. We had traveled 364 miles. Traffic nearing Los Angeles even in the middle of the day had slowed to a crawl and we slowed again as we circled the outskirts of Vegas, (photo taken as we crept past The Strip) but the rest of the trip had been open road and easy driving.
Posted by Jackie and Joel Smith at 8:04 AM