Air-Cruise deals - know before you go 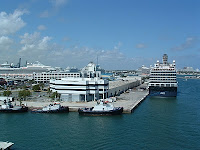 As noted in earlier blogs, we do love cruising. Often the only thing that keeps us from taking more cruises -- particularly those in exotic places -- is the difficulty in finding or the cost of air transportation to get us to the port of embarkation or disembarkation. Several summers ago Silversea tempted us with a last-minute deal on a cruise from Venice to Venice via Croatia, Montenegro and Greece. The cost of airfare was prohibitive so we cashed in some airmiles and started our journey: flying Seattle to San Francisco, from there to London Heathrow, then bus to Gatwick, from there a flight to Bologna and from there a train to Venice. We were numb by the time we arrived some 24 hours later.

We've always opted to make our own flight arrangements though as it seemed we had better control of the routing and aircraft we would be flying. After reading the article by Erica Silverstein, Senior Editor at Cruise Critic, that examines that very issue, we think we will opt to keep doing so. (Click on this blog's headline to link to her article.)
Posted by Jackie and Joel Smith at 2:30 PM