We were introduced to Paris a few years ago while staying in the 7th Arrondissement's (district's ) Rue Cler because Rick Steves', the Edmonds-based travel guru, recommended it in his guidebook. Rick didn't steer us wrong. Settled in to one of the hotel's he recommended, we were charmed by the area's street markets selling everything from fruit to flowers on the pedestrian-friendly two-block stretch of street. Cafes, bars and bakeries line the street, providing a backdrop to street merchants. It snowed often during our week-long stay and temperatures seldom got above freezing that March, but the merchants bundled up and sold their wares. 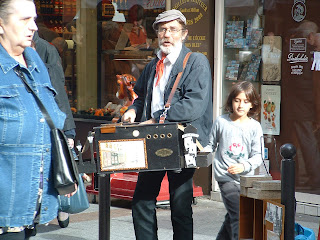 This trip we stayed in the 17th Arrondissement, a new favorite part of town; our hotel a block from the Arc d' Triomphe, but we couldn't resist a Sunday morning stroll through the Rue Cler. Paris street markets are open until 1:30 on Sunday then close until Tuesday morning, so the place was packed with shoppers. And despite the joke that it has become Rick Steves' Rue Cler, packed with tourists, we visitors were few and far between. 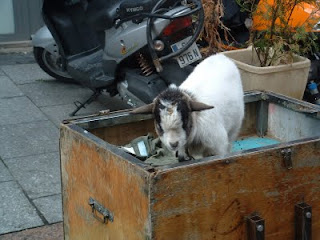 In addition to the vendors the organ grinder kept the atmosphere lively much to the delight of children drawn to his music. Just a bit further down the block this kid stole the show.
Posted by Jackie and Joel Smith at 5:10 AM