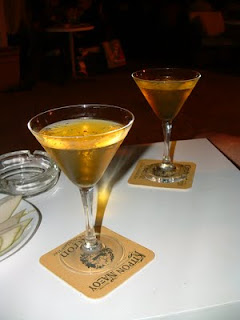 I neglected to say much about the Greek Island of Naxos, the last stop on our itinerary-less fall trip only as result of lack of time and technology. But this, the largest of the Greek Cyclades, shouldn't be overlooked for a number of reasons - one of which is sipping Kitron (Citron) a drink only distilled here.

In appearance the citron, appears to be a large, oversized lumpy lemon. The story goes that it was introduced into the Mediterranian region back in 300 BC by Alexander the Great. Believed through the centuries to have medicinal value and reputed to be a symbol of wealth and fertility, its popularity grew to such proportions that citron groves nearly blanketed the entire island.
Today the island has two major producers and the limited production pretty much limits availability to the island. It is great for souvenirs. The key ingredient to the drink are the citron tree leaves, not the fruit. The family-run Vallindras Distillery opened in Halki town in 1896 and continues to use the old method of drying the leaves, then mixing them with alcohol and water in a boiler heated with olive wood fires; ultimately adding water and sugar to the mixture creating the popular drink. It is worth a visit when you are on Naxos. 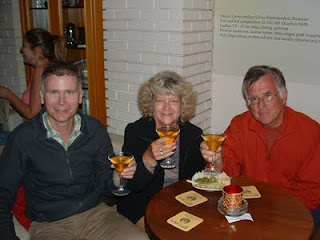 Our nightly ritual for the three of us -- Joel and I and Rob, the traveler from Australia with whom we forged a friendship as we hauled suitcases up the hill in Folegandros -- was to sip a Kitron (or two) at Kitron Naxos, a popular waterfront bar, across the street from the marina. We had actually begun our nightcap tradition in Folegandros, sipping Greek raki, and we continued the ritual sipping Kitron in Naxos.
Kitron comes in three versions: green with the most sugar and least alcohol (30%), clear, which tastes somewhat like Contreau (33%) and the yellow which has the least sugar, most aroma and alcohol (36%). We liked the yellow best - although each was good.
Posted by Jackie and Joel Smith at 6:49 AM