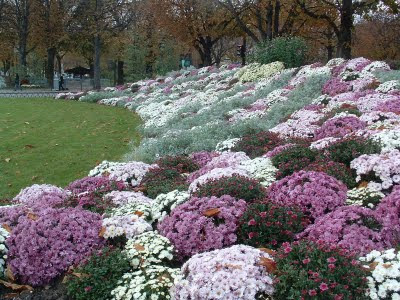 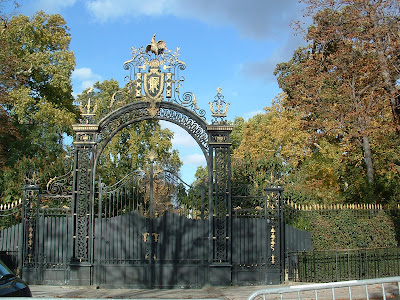 Leaves are falling but the trees on the grounds of the Royal Palace were still shades of green and gold this afternoon. Just down the street the flower beds were filled with lavender and white blooms. The sun was out but just a hint of a chill in the air. Rain is predicted to return tomorrow.

Posted by Jackie and Joel Smith at 8:33 AM 0 comments

A toast to Paris 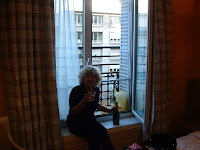 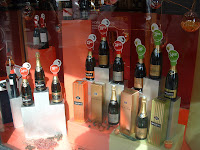 So many champagnes and so little time. The photo on the left is of just one of the hundreds of window displays showcasing more champagne brands than one can imagine. The other is of me with one of those bottles. I couldn't resist the temptation. Bottle prices are reasonable, in fact, less than back home in many cases. Champagne by the glass in local bars and restaurants we've been to ranges from 10 - 12 euros; about $15 - $18; making the decision to buy a bottle much easier.
Since our room doesn't have a refrigerator we've chilled our champagne on the window sill; the crisp fall weather was a perfect device for doing so. We added some of the fresh raspberries we got at the street market and toasted our stay in this fabulous city.
Numerous guidebooks say that wine (that doesn't include champagne) is cheaper here than water. Today at lunch we ordered two salads and 'still' (tap) water. Silly us. . .we thought tap water was free; not so at Fauchon, the trendy shop that sells wine and other tasty items. We paid 5 euros or $7.50 for it.

Posted by Jackie and Joel Smith at 8:03 AM 0 comments 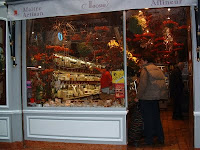 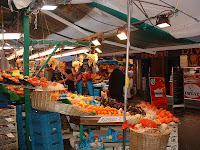 Thought you'd like to join us at our Saturday morning market walk today: Marche Poncelet, about five blocks from our hotel. I chose fruit and cheese to tempt your taste buds.
Posted by Jackie and Joel Smith at 7:31 AM 0 comments 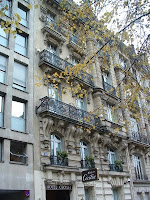 I am sitting just inside the top left hand window writing this post from Paris. We arrived at our hotel at 8 p.m., our delay thanks to the Orly ground-handlers strike was only about three hours. We are in Hotel Cecilia, a charming three star hotel about two blocks from the Arc de Triomphe.
It is a rainy, cloudy day here and the leaves are falling. Definitely a change from the month we have just had in Greece. We put on shoes and socks for the first time since mid-September today; rather a confining feeling but good for jumping rain puddles.
Posted by Jackie and Joel Smith at 7:26 AM 0 comments

We spent the first couple of hours in Athens cancelling the credit cards that Joel had in his wallet -- several locals told us that generally the bad guys take the cash and toss the rest, but to be on he safe side, we cancelled the cards anyway.

Prior to the trip we had notified the fraud department of each company of where we would be traveling so that they wouldn't put a hold on the card when activity showed up from places outside our normal circle. What we didn't do was to verfiy the phone number to use should the card get stolen. Turned out the numbers on the back of two of the cards weren't valid; one had been changed, one was an 800-number that only worked in the US. (They have collect call numbers to use outside the US). We used our laptop to access their web sites and get correct numbers, but could have saved much time had we had the numbers with us.

What has saved us real inconvenience is that I have a credit card account in my own name; Joel isn't on it. I had it and we are using it for the remainder of the trip. I also had a card for each of the accounts we cancelled which provided us the number of the account to cancel. Single travelers should keep credit cards in different bags and make sure you have copies of the card numbers somewhere other than on the card.

We will have new cards waiting for us by the time we get home.
Posted by Jackie and Joel Smith at 7:18 AM 0 comments

While we have met some of the most incredibly kind people along the way, we also have now experienced some of the world's worst: pickpockets. Throughout the world we have encountered folks who told tales of taking precautions and being on alert for criminals and still were crime victims. Guidebooks tell you to be on the lookout as well. We have usually been obsessive-compulsive about theft prevention. But we've now joined the ranks of pick-pocket victims.

Subway trains, tourist attractions, crowded shopping areas are all ripe for the picking (pun intended) and we usually are on high alert when in those places. I have a lock-hold grip on camera and purse, with bag clamped under the arm. Joel has hand in pocket and similar grips on bags. But we weren't on high enough alert in Piraeus as we caught the metro into Athens.

Hindsight is 20-20. I thought the man that blocked my way out of the doorway and down the isle was simply being rude. He continued to be 'rude' to Joel not letting him move past with suitcase and bag. I was so focused on Mr. Rude that I didn't pay attention to his two sidekicks; one of which removed Joel's wallet from his pocket so swiftly that he didn't realize it was gone until they had hopped off the train at the first stop out of the port.

I can tell you I am no longer the nice traveler on metro trains or buses; look at me for more than 30 seconds or glance at my purse, and I am likely to start swinging my umbrella at you.
Posted by Jackie and Joel Smith at 6:57 AM 0 comments

We head to Athens on Thursday after a far too short a stay in Naxos, another delightful island in the Greek Cyclades islands. After all my writing about short notice hotel bookings, we found a boutique hotel on line that sounded so good that we booked it several days in advance just to make sure we had a room in it. So much for advance bookings -- after we had it confirmed, they wrote yesterday saying they really had no room and we were out of luck. We are now booked in another boutique hotel, this one only 400 meters from the Acropolis. So we may have inadvertently lucked out again. More details to follow on the hotel after our arrival.

We travel there by ferry leaving at 9:30 a.m. and five hours later arrive in Piraeus.
Posted by Jackie and Joel Smith at 6:14 AM 0 comments

Email ThisBlogThis!Share to TwitterShare to FacebookShare to Pinterest
Labels: Athens 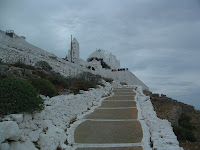 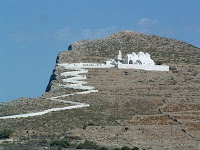 Baptisms are second only to weddings around here - very important and very special and for that reason the entire town turned out for the baptism. Anna told us we were invited, we all went. We joined the townsfolk in the climb up the hillside walk to the cathedral and attended the ceremony in the cavernous Greek Orthodox Church.
Posted by Jackie and Joel Smith at 3:29 AM 0 comments